Telematics and vehicle tracking brought to you by Ctrack
You are here
Home > Company News > COVID-19: A disaster like no other

Very few industries will escape being impacted negatively by the COVID-19 virus crisis and subsequent lockdowns around the world. The result is that the world’s transport logistics and supply chain management are in a real mess. The world is witnessing the virtual total collapse of an industry sector that is vital to the global supply network. It is probably at its worst right now, (end May).  The resulting mess will take months to clear.

Ctrack Freight and Transport index shows the steepest decline yet! A world out of sync in lockdown and goods stay at home too

The Ctrack Freight and Transport Index recorded a decrease of 14,7%. Perhaps it is better to describe this as a collapse and not just a decline.

Trucks wait for days to cross borders; ships wait weeks outside ports; and aircraft are grounded for months. Some countries are running out of storage capacity for petroleum products. Many importers are now being forced to store goods locally at huge cost as demand has dried up. Cargo transfers from one country to another have declined by almost 40%.

Governments are not co-ordinating much in terms of logistics and supply chains, while fearful and economically challenged consumers are leaving warehouses full and supply chains stranded. This is resulting in cargo being left stranded at sea, on trucks and trains as well as at factories and warehouses. Rail is still delivering to ports and mountains of bulk commodities, such as coal and iron ore, continue to grow and add to the chaos.

Merchant fleets often do not want to load cargo as they fear having to finance loaded ships for months with no payment in sight as companies continue to file for bankruptcy around the world.

Only a few aircraft have been permitted to operate, so produce such as fruit is rotting on farms around the world while many people are starving.

Just as people stayed at home so too did many goods. Goods stayed in the ground, in warehouses, on trucks and ships.  Comparatively few products have reached the supply chains. The situation has caused such a cargo jam that it will take a long time to sort it out.

People working in the freight industry worldwide who are still keeping us fed and supplied with medicines, medical equipment and other essentials have not even been given a “shout out” to show the nation’s appreciation. The things that matter generally arrive on time and help the world try to beat the crisis. A big thank you to all of you in the transport industry from all of us at Ctrack and its partners!

The dramatic decline of 14.7% in the Ctrack Freight and Transport Index for April is an important indicator of the very worrying situation that currently exists in the logistics and transport sectors of the South African economy.  The fact that the data is smoothed out to better show trends does not fully reflect the logistics horror now apparent in South Africa.  For that we will have to wait for data from May and possibly June.

The volume of goods shipped and landed in South African ports was less than at any time since the year 2000. We believe that we are probably back to levels last seen in this country before it became a democracy.

Aircraft movements came to a virtual standstill in April and were the lowest in living memory. There were only a little more than 2 000 fights into or out of South African airports, while the amount of goods transported is probably the lowest since World War II.

Road freight volumes, even when smoothed, were the lowest since 2008 while rail is at early 2008 levels and declining further.

We have reports of truck drivers going hungry at border posts and food and medicines stuck at borders between some African countries. Regulations have been changed so often that it is a fulltime job for industry bodies such as the Road Freight Association (RFA) to keep abreast of the many changes. Smaller operators in all transport and logistics sectors are struggling to keep up.

The strangest occurrence amidst all this chaos was that higher volumes of petroleum products than usual were pumped into Gauteng, probably due to storage requests rather than for actual use by motorists and transport companies. This was also the only subsector to record positive growth in April, even if it was only 0,2% above the figure from a year ago.

Chart 1: the Ctrack Freight and transport index over time. 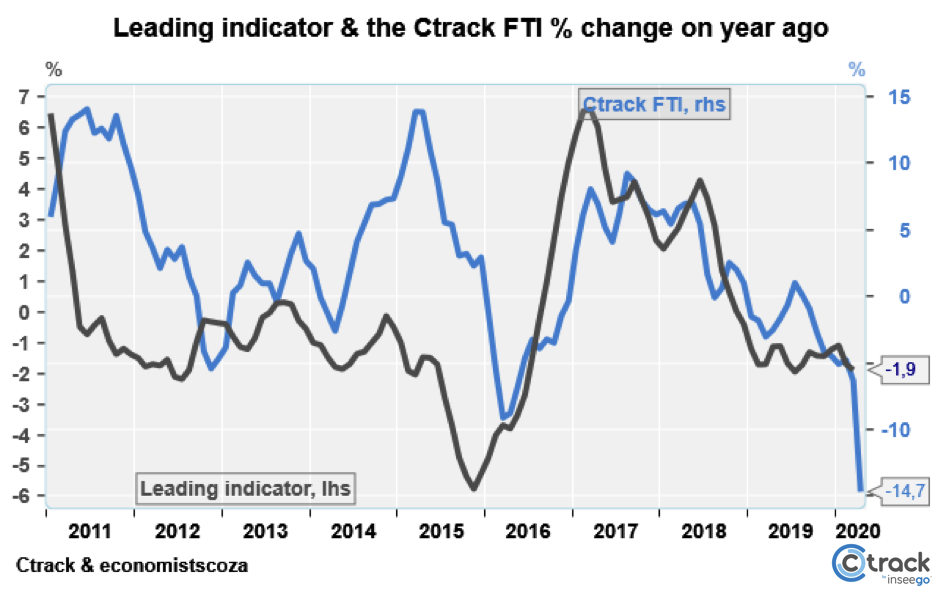 Ships have been left moored outside ports while the cargo transferred between ships and ports fell 9,5%. We suspect that this situation will decline further as the unadjusted data shows an even bigger decline. Many shipping companies are actively seeking financial assistance as are airlines.

Air freight declined by 23,5% year-on-year on a smoothed basis. This is by far the most effected sector in the Ctrack Freight and Transport Index. Air freight has been damaged so badly that it is not only passenger carriers that are seeking business rescue, but air freighters and freight forwarders too. The air transport crisis is hurting everything from tourism to car rentals and also fresh produce cargo shipments. 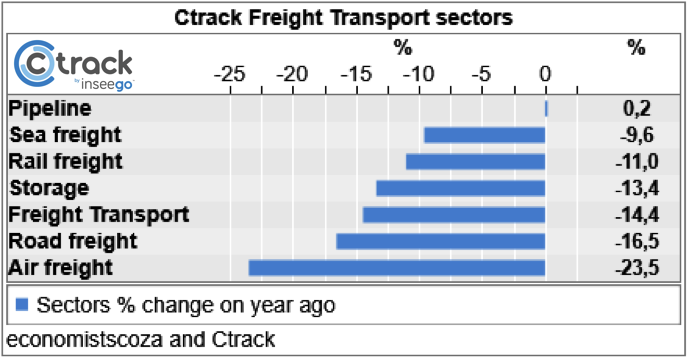 No port, airport, rail network or road freight operator is going to clear the mess in a short time.

In China most of its problems are behind it, but it took the best part of a month to get to almost normal logistics levels.  However, there is still the problem of waiting for ships to return to collect their next loads of cargo. This situation could take another two months to normalise.

The road freight sector, which has been operating partially since lockdown in March, transported 16,5% less cargo than a year ago. Again, this number is smoothed, and the raw monthly data reveals a decline closer to 40%. However, due to the volatile nature of this data we have used a rolling three-month average. We expect slightly better monthly numbers in May, but the rolling three-month average will be lower still.

Ctrack is keeping a close eye on these numbers as we know that much of the industry is dependant of them turning around.

Accurate planning and up-to-date information are now, more than ever, the road transporter’s best friend. These are vital cogs to help guide companies through the mess that COVID-19 has created.

Rail freight also declined in double digits, being 11% lower year-on-year.  The actual volume of cargo transported is similar to the amount moved in January 2008, which was more than 12 years ago.

Storage is also in a steep decline, despite some storage operators are having to store more than usual as certain goods are being packed into warehouses to keep ports clear. Transhipments led the decline with a 39.3% fall year-on-year.

Some local warehouses, which are virtually full to capacity are selling storage space at a premium which is adding to the overall cost structure of the SA economy.

The most important news however is that we believe the worst of the storm is almost over and we trust it will never happen again in our lifetime. Fortunately, the transport and logistics sectors are resilient and will recover, but this recovery will take far longer than what would be ideal.

Table 1: All the Ctrack Freight and Transport Numbers

“It is no good looking in the rear-view mirror,” commented Hein Jordt, Managing Director of Ctrack. “Now is the time to look ahead through the windscreen and develop manageable strategies and business plans to get your business back on its feet. We, at Ctrack, are very aware of the hardships that lie ahead and the fact that the business environment will be more competitive than ever as everybody does their best to recover from this devastating economic setback we are all suffering.

“Now is the time to think out of the box. Be innovative. We have to reset everything to deal with a new normal. We only have a limited timeframe to reach out to existing customers and assure them of our ongoing support so as to retain them.

“We have to develop methods of attracting new customers too. Remember, it is customers who will decide your future with their wallets and service level expectations. COVID-19 has changed the playing field and it is up to us to adapt or die!”