Telematics and vehicle tracking brought to you by Ctrack
You are here
Home > Company News > Stopping the slaughter – Isuzu puts its back in, too

A rhino bull that is fast asleep snores exactly like an old man; and a 100kg rhino calf twitters like a tiny bird when calling for its mom. These facts I learned while getting close to these large, rugged animals on an Isuzu de-horning project in Hoedspruit, Mpumalanga. It was a unique experience I will never forget. There, in the epicentre of rhino poaching in southern Africa, Isuzu South Africa supports Nkombe Rhino, a non-profit organisation that funds de-horning of rhinoceros to help secure these prehistoric animals against poachers.

The process has to be repeated every 18 to 24 months, as the horns grow back quite rapidly, exactly like fingernails.

Asked why Isuzu South Africa, better known for helping to remove landmines in Mozambique, are now involved in rhino conservation – and by cutting off their horns at that – Isuzu brand manager, Mlungisi Nonkonyana, said they support de-horning because it makes these animals less attractive to poachers. It does not harm the animals and statistics are showing that it works.

Nonkonyana cited stats from Zimbabwe, where de-horned rhinos in certain conservancies have a 29% better chance of surviving than horned animals. At the Blue Canyon Conservatory in Mpumalanga the stats are even better. The rangers there tell me they only lost one rhino to poachers in May, compared to the neighbouring Kruger Park, where six rhinos were killed on the same day.

This is what Nonkonyana means when he says de-horning works and why Isuzu funds the tracking and darting of these majestic creatures from the air.

Isuzu South Africa also provides a fleet of new KB 300 4×4 double cab bakkies to the game rangers, who protect the horns, that are tagged, bagged and locked away on the back of the bakkies, with automatic assault rifles.

But, cautions Nonkonyana, the stakes are much higher than when Isuzu funded Operation Rachel in 1993 and Operation Mandume in 2007 to destroy firearms, ammunition and ordinance stashed in rural Mozambique. There the ex-combatants just wanted safety for their children, which the desired outcome of the projects.

In Hoedspruit, a kilogramme of rhino horn can fetch about $60 000 (around R870 000) on the black market, according to Reuters. In a desperately poor rural area, such a fortune ensures a steady stream of poachers every night.

“Without concrete action to prevent further losses, we are likely to lose this species forever,” said Nonkonyana.

Incongruous as it may seem, so desperate are game rangers with rhino in their care that two of them told me they’d welcome it if poachers would just contact them and ask to buy the horn direct, despite this being illegal.

One ranger, who cannot be named while government is still lending its collective ear to rhino horn smugglers who want to keep supply low and prices high, said he’d let any poacher have a horn for R5 000, just to keep the animals alive.

That way he would cover the cost of tranquiliser darts and the helicopter to find the rhino, but more importantly, he would no longer every week have to find a new animal slowly dying in the veld with half its face hacked off.

The rangers’ views were endorsed by veterinarians, who told me that instead of banning a trade in rhino horn, the South African government would – again – be able to raise revenue by selling rhino horn, following this process of regular de-horning.

But this time rangers do not want to allow rhino trophy hunting. They instead want to implement the late Ian Player’s suggestion to create a controlled stockpile of rhino horn using DNA signatures and then controlling the sales from this base, like De Beers does with diamonds. 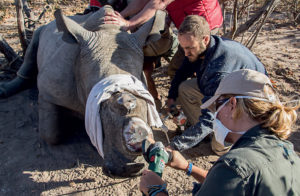 To date, this sound idea has just been answered by vague fears that a legal trade in rhino horn may spark an unsustainable level of demand, mostly from the East. So instead of seeing a rise in rhino numbers, as was the case when game farmers could shoot rhinos for their trophy horns, we now have on average of 4,9 rhinos killed throughout SA every week.

Between 2008 and 2015 an estimated 5 500 rhinos were slaughtered this way in South Africa and the rangers in Hoedspruit predict this year could see 1 800 rhino killed if current trends continue.

Is it any wonder then that desperate rhino rangers are now offering to aid and abet the smugglers to stop the slaughter?

Thanks to Isuzu South Africa, a group of 25 rhino were de-horned to buy them a bit of time from the greedy onslaught. But even with rhino horn shavings selling for thousands of Rand, their stubs of horn still have to be guarded while local communities are educated and told of the lack of horns inside the fence.

This is where Isuzu bakkies continue the battle on the ground long after the helicopter flies off.