The Mercedes-Benz Actros is the most productive truck in South Africa, MAN’s New Truck Generation is the most fuel efficient and the tautliner interlinks on the country’s highways are an astonishing 12% more fuel efficient than they were 10 years ago. 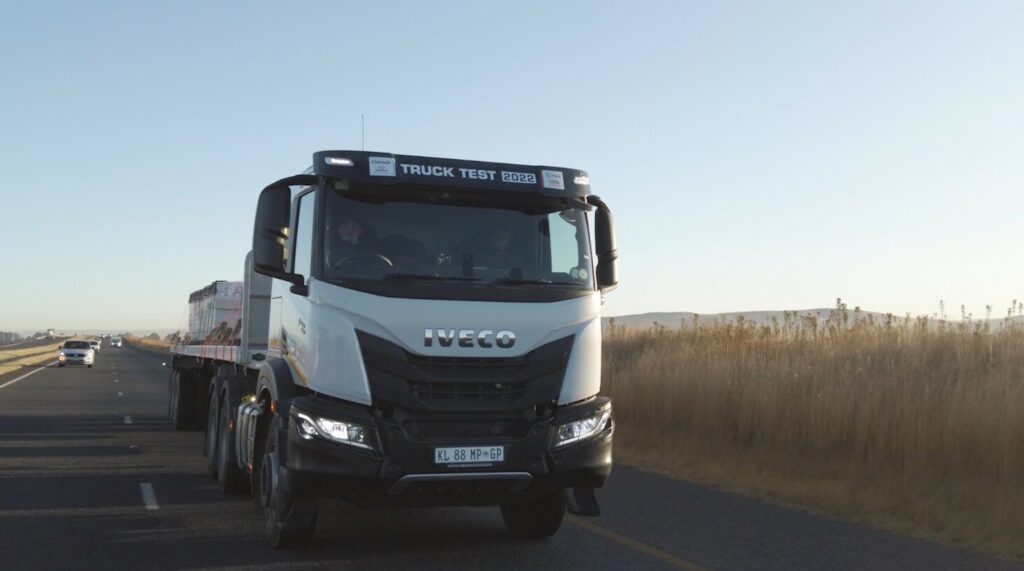 These are among the facts to emerge from Truck Test 2022, a South African event unique on the continent of Africa. In fact, even in highly developed first-world markets, it is rare to find an event similar to South Africa’s Truck Test. That’s because this unique event – organised by FOCUS on Transport & Logistics magazine – pits extra-heavy trucks against each other on the same route and on the same days. This is very important; weather and congestion can make the world of a difference.

FOCUS partners with TruckScience, a company that has developed software that helps truck salespeople and transport operators to spec the best truck for the job, and its customer success manager, Martin Dammann, reveals that Truck Test is something of which South Africans can be really proud. “Truck tests are conducted on other continents, but what makes ours truly unique is that we tested eight vehicles on the same days under the same conditions, whereas the tests conducted overseas are typically done on one vehicle at a time. With our test we are able to make direct comparisons between the different vehicles,” he points out.

Furthermore, all the trucks were fitted with telematics from Ctrack. They all ran on Engen Dynamic Diesel 50ppm with Pro-Drive. They were all hooked up to Afrit trailers. Even the loads were the same; they all carried bricks made by Vibro. On Truck Test, the flatdecks carried about 10 500 bricks while the tautliners transported a whopping 12 000.

The goal of Truck Test 2022, explains Charleen Clarke, editorial director of FOCUS, was to help transport operators select the very best trucks. “South Africa is a most unusual market in that we have a plethora of brands here from around the world. Accordingly, transport operators are faced with quite some choice when it comes to vehicle selection. It was our goal to arm those operators with scientific evidence that reveals which trucks are South Africa’s very best,” she reveals.

All suppliers of extra-heavy trucks (6×4 truck tractors with a GCM greater than or equal to 50 000 kg) were invited to participate in Truck Test 2022. Each truck manufacturer had to supply a fully loaded vehicle, a driver and an observer. The observers are placed in rival vehicles.

Truck Test was well supported by many of the leading players within the commercial vehicle industry. Engen sponsored the fuel used on the test while Afrit sponsored the trailers. Ctrack sponsored the tracking devices while Vibro sponsored the loads. The specifications and results were compiled by TruckScience while ADA was responsible for logistics. AutoTrader, BPW, Loadtech and Standard Bank also sponsored the event.

The test, which took place last month, started and finished at Engen Blockhouse, south of Johannesburg. The convoy of eight trucks then made their way to Pinetown (just outside Durban) and back to Johannesburg. The route, which totalled 1,142 km, was predominantly on the N3, which is one of the country’s most significant trucking routes. It incorporates some extremely challenging gradients.

According to Clarke, one of the biggest advantages of Truck Test is the fact that there is zero subjectivity in the testing process. “We deal in cold, hard facts,” she points out.

The Mercedes-Benz Actros 2652LS/33 RE, which pulled an interlink tautliner, emerged triumphant in this regard. This Actros is a Euro 3 truck (South Africa is still a Euro 2 market).

According to Christo Kleynhans, head of product Daimler Truck Southern Africa, the Actros 2652LS/33 is regarded as the first choice in a long-haul truck tractor for a non-dangerous goods operator running at 56 tonnes GCM looking for maximum efficiency on national routes.

“The winning formula starts with the 15,6 litre OM473 six in-line engine equipped with a turbo-compound system that recovers up to 30kW of energy from the exhaust gas that would otherwise just leave the exhaust pipe as a combination of heat and noise. This impressive power plant is matched to a 12-speed G281 transmission with an output retarder and a direct top gear that turns a pair of RT440 hypoid reduction rear axles with a 2.86:1 axle ratio,” he reveals.

A particularly impressive feature of the Actros – which was indeed a not-so-secret weapon on Truck Test – is Predictive Powertrain Control (PPC). This highly innovative feature pre-emptively accelerates and decelerates the truck for best fuel economy when running in cruise control based on the vehicle’s instantaneous position using 3D map data.

On Truck Test 2022, the Actros was driven by Duncan Prince, Unimog and specialised heavy trucks manager at Daimler Truck Southern Africa, and he made extensive use of this feature. “It’s an incredibly helpful feature. The effect of PPC is that the cruise control manipulates the throttle as if the truck were driven by an expert driver who knows a route intimately despite the truck never having travelled the route before. It can turn a novice driver into one who is both productive and fuel-efficient,” he explains.

Those two traits – productivity and fuel-efficiency – are precisely what are measured at Truck Test. And, this year, the Actros achieved the remarkable Payload Productivity Factor of 47.9. To put this in perspective, the second-placed truck achieved 45.

While the vehicle’s fuel consumption was good, the Actros completed the 1 142,5 km route in a very short time: 16 hours and 51 minutes to be precise. Once again, putting this into perspective, other trucks took up to 19 hours and 21 minutes to complete the route. The average speed for the Actros was a remarkable 67,8 km/h while the slowest truck achieved 59,1 km/h. 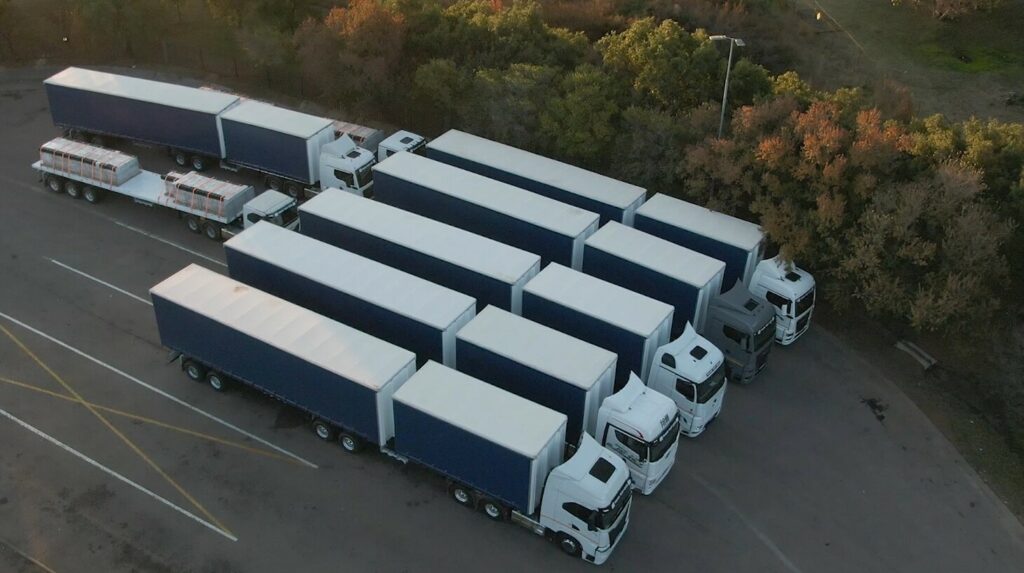 The European trucks were always expected to do well in Truck Test 2022; they’re all exceptional vehicles. The FAW JH6 28.500FT – which was hooked up to an Afrit interlink tautliner and is the largest of the truck tractors from FAW Trucks South Africa – was considered a bit of a wild card; no one knew exactly what to expect. The truck did extremely well; achieving 50,68 litres/100 km and coming second in the fuel efficiency stakes (out of all the trucks hooked to tautliners and when taking AdBlue consumption into account). On this note, the truck entered by this company was a Euro 2 vehicle meaning that – even though it does have an AdBlue tank fitted – it wasn’t required to use AdBlue.

The JH6 is fitted with the renowned CA6DM2 13-litre six-cylinder common-rail turbocharged and intercooled diesel powerplant. This engine develops 370 kW of power at 1 800 r/min and 2 300 Nm of peak torque at 1 400 r/min.

The 6DM2 engine is manufactured in FAW’s engine plant in Wuxi, China. The ZF 12-speed TraXon AMT transmission also has a parabolic spring suspension front and rear to address vehicle weight requirements. It houses a full air dual circuit Wabco braking system with ABS as part of its safety features. 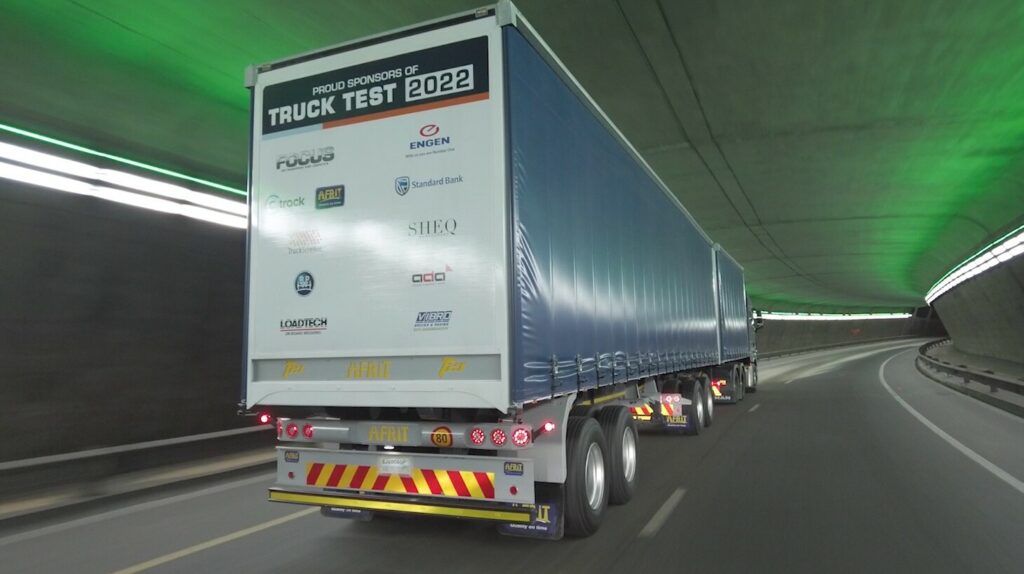 Needless to say, the truck manufacturers that fared particularly well were rather delighted with their results.

The Truck Test 2022 victory was not the first accolade to be achieved by the Actros; it also won the 2020 International Truck of the Year. “We are very proud of both of our accolades. Transport operators can purchase an Actros, knowing that it has been tested independently – and been found to be head and shoulders above the rest – not only here in South Africa but globally too,” says Daimler’s Kleynhans.

Livingstone Mulaudzi, head of product management at MAN Automotive (South Africa), says that the results of Truck Test even astounded the MAN team.

“In this test, we used a combination of proven MAN ProfiDrive techniques and driver assistance technologies endowed in our new MAN TG range of trucks. We are ecstatic about the results. Once again, we proved that MAN offers the most fuel-efficient trucks in the market. When we set our internal target of beating fuel consumption of 50 litres/100 km on the extremely challenging N3 route (Johannesburg to Durban and back again), we thought it was impossible – but we made it!” he reveals.

Mulaudzi points out that the results of Truck Test could not have come at a more appropriate time. “Given the ever-escalating fuel price, never before has there been such emphasis on fuel efficiency. Our customers will appreciate the direct saving in operating costs offered by the new MAN TG range of trucks whilst making a positive contribution to sustainable road freight by reducing carbon dioxide emissions. We are extremely proud of what our drivers and the trucks have achieved. It is no small accomplishment to receive confirmation that our trucks are the most fuel-efficient in South Africa,” he says.

Yongjun Li, CEO of FAW Trucks South Africa, expressed his delight too. “FAW Trucks have been tested and reviewed against the standard of market leaders, not only in South Africa, and this is done to ensure we align consumption, performance and efficiency and are always striving for better results – as shown in the recent local tests. These fuel-efficiency reviews ensure our trucks are up with the best when it comes to cost per km.

“Right now, for any transport operator, total cost of operation is first and foremost when it comes to selecting vehicles and FAW Trucks has a proud history of carefully matching engines and performance to the stated capabilities of our trucks in order to maximise efficiency in every aspect, including fuel consumption,” notes Li.

While the truck manufacturers were pleased with their results, South African transport operators should be delighted too. Dammann reveals that Truck Test 2022 has really highlighted the fuel consumption improvements achieved over the last 10 years. “When comparing the results for this test to the one conducted in 2012, also on the Johannesburg to Durban route, the fuel consumption has improved by an average of 9% for the tridem flatdeck combinations and an astonishing 12% for the tautliner interlinks. The average speeds have remained roughly the same, therefore the lower fuel consumptions are also a direct improvement on the overall productivity.

“These improvements can mostly be attributed to the new technologies introduced by the manufacturers, which include more efficient driveline configurations, aerodynamic enhancements and driver-assist features to optimise the momentum of the vehicle. The driver still plays a critical role, however not so much in terms of the skill to drive the vehicle, but rather to understand and correctly apply the different technologies that actually drive the vehicle,” he notes.