A total focus on people – be they customers or members of my team at Hino Shelly Beach – is the reason for our ongoing success, which culminated in being awarded the title of Hino Dealer of the Year for 2017 recently,” said Gansen Chetty, the dealer principal. 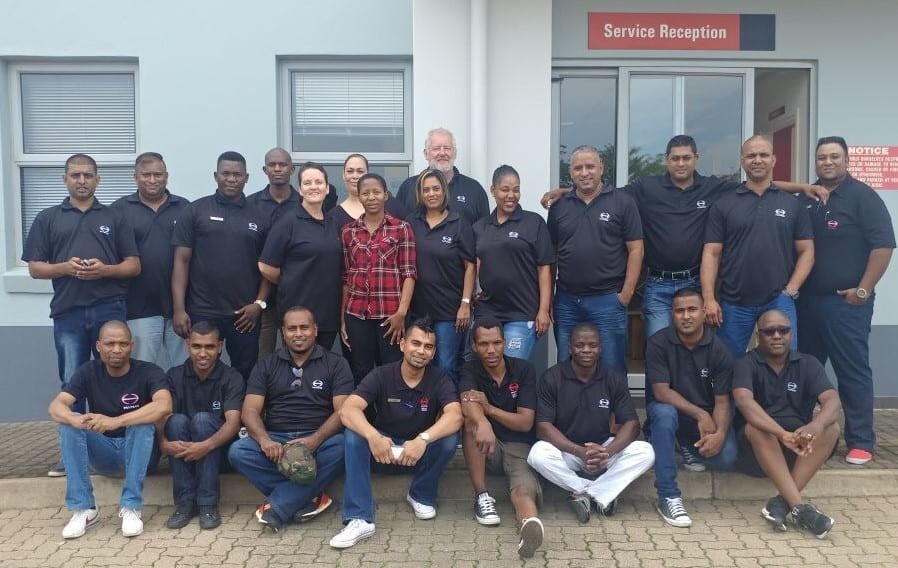 “I believe in always having a friendly approach in dealing with people and have promoted this philosophy internally, telling my team that if we have good relationships with all our customers, suppliers and our own team members then the awards will follow. You reap what you sow, and this is what has happened. I also believe that dealing with difficult customers and their problems makes one stronger.”

Gansen Chetty, who joined Hino Shelly Beach, part of the Halfway Group, as dealer principal in March 2014, has a history with Hino trucks going back to 1997 when he was employed as a salesman by Hino Pinetown. 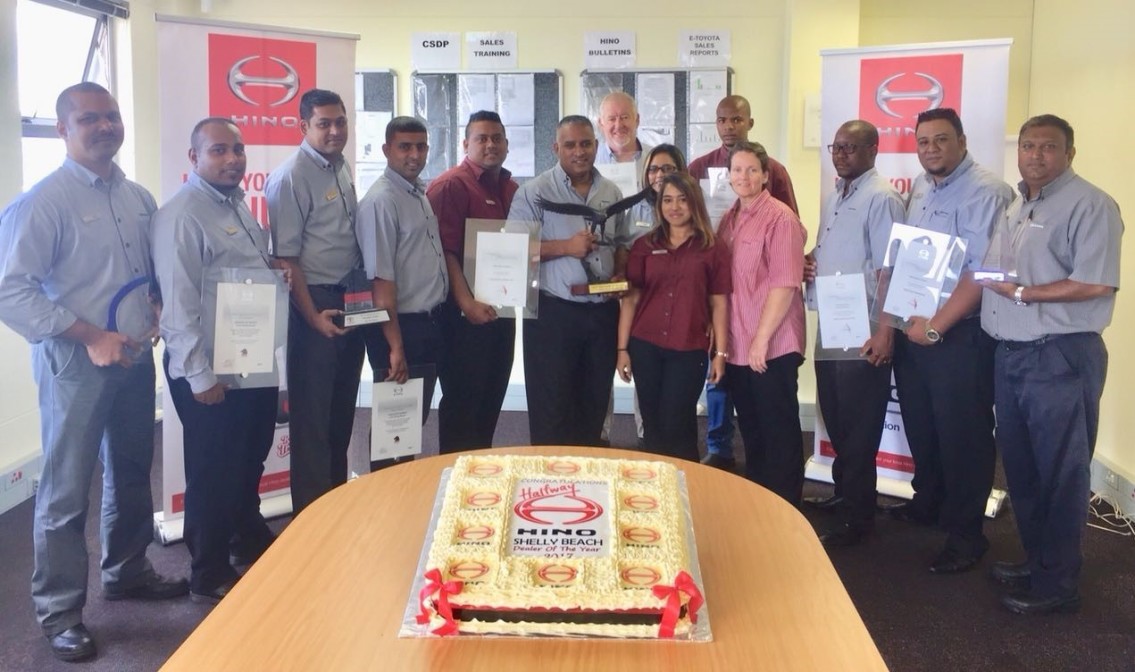 “I regularly sold 100 or more trucks a year and was several times a winner of Hino South Africa’s national skills competition for salesmen. I realised that to be an achiever one must do something; you must be an active participant in whatever you tackle. You cannot wait for things to come to you,” he explained.

“I am also transparent about all aspects of our business with my fellow team members and ‘walk the talk’ with them by having daily meetings with parts and service staff and getting together once a week with the sales team. We make full use of all training offered by Hino South Africa and do a lot of internal training as well. We also have product knowledge sessions and regular think tanks about ways of improving the manner in which we do business, with particular focus on making the customer experience even more meaningful and satisfying.”

Hino Shelly Beach won the Customer Experience award for the second year in a row.

Not only did Hino Shelly Beach win the overall Dealer of the Year award for the first time in 2017, but it also won the Customer Experience award for the second year in a row. Other awards went to Hino Shelly Beach team members, with Grant van Vliet taking the national award for parts marketing, Vinny Naidoo being awarded Hino Knight of the Year, while Vinny and his colleague, Marlan Chetty, who is also a Hino Knight, were presented with Ruby Awards for selling more than 50 trucks each in 2017. 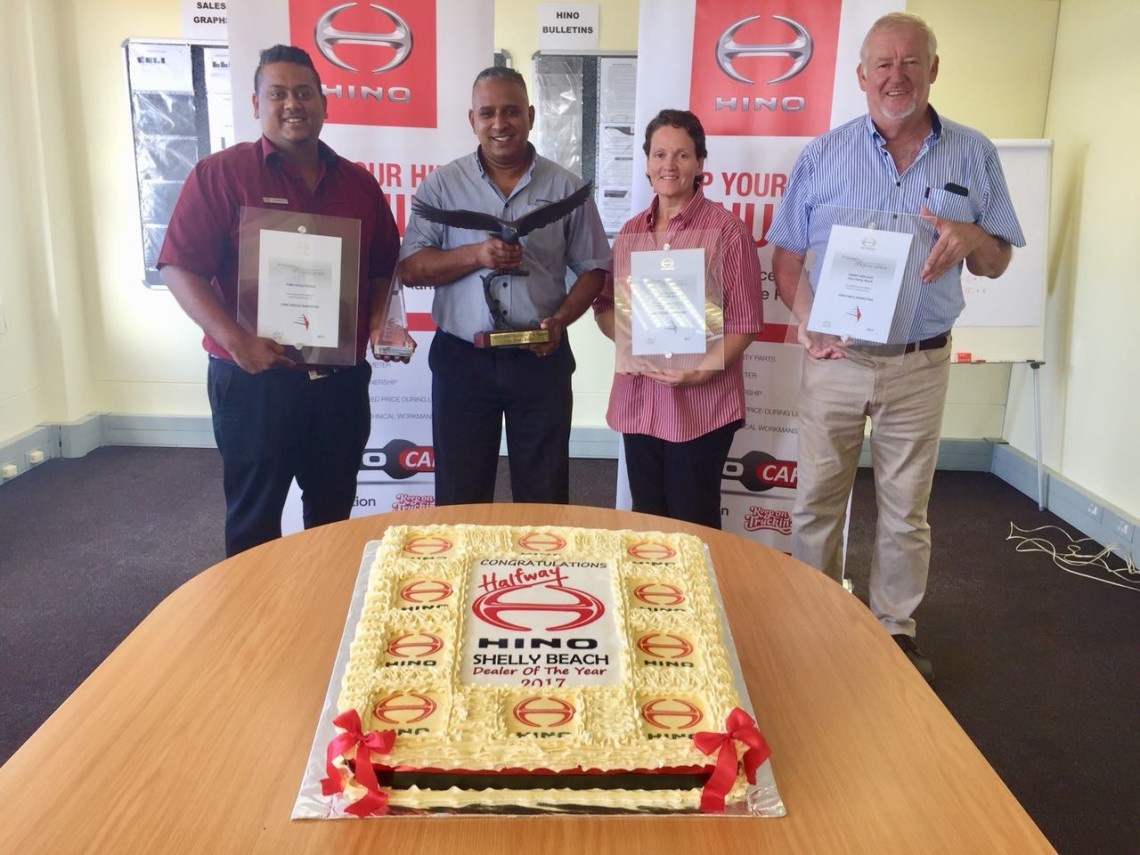 Subsequently Hino Shelly Beach has received a Diamond Arrow award from PMR Africa after being rated the best commercial vehicle dealership in the South Coast Region of KwaZulu-Natal. The survey is conducted over 12 months and respondents are CEO’s, managing directors, business owners, company directors and managers as well as senior government officials based in the region.

“We owe everything to our customers and always strive for 100 per cent ratings from them in the quarterly Scott Byers Comparative Customer Experience surveys. We are fortunate in having a devoted and professional team at the Hino SA head office in Sandton who provide us with excellent support. In addition, we have the full backing of the Halfway Group, especially the CEO, George Baikie, and the financial director, Rob Newton,” said Chetty.

“I must also mention that one of the major drivers in Hino’s ongoing success in terms of satisfying its customers flows from the global Hino Total Support philosophy which builds strong and lasting relationships between all the involved parties – Hino Japan, Hino South Africa, the dealer network and suppliers to become a trusted partner to their customers. This is a programme that really works,” explained Chetty. 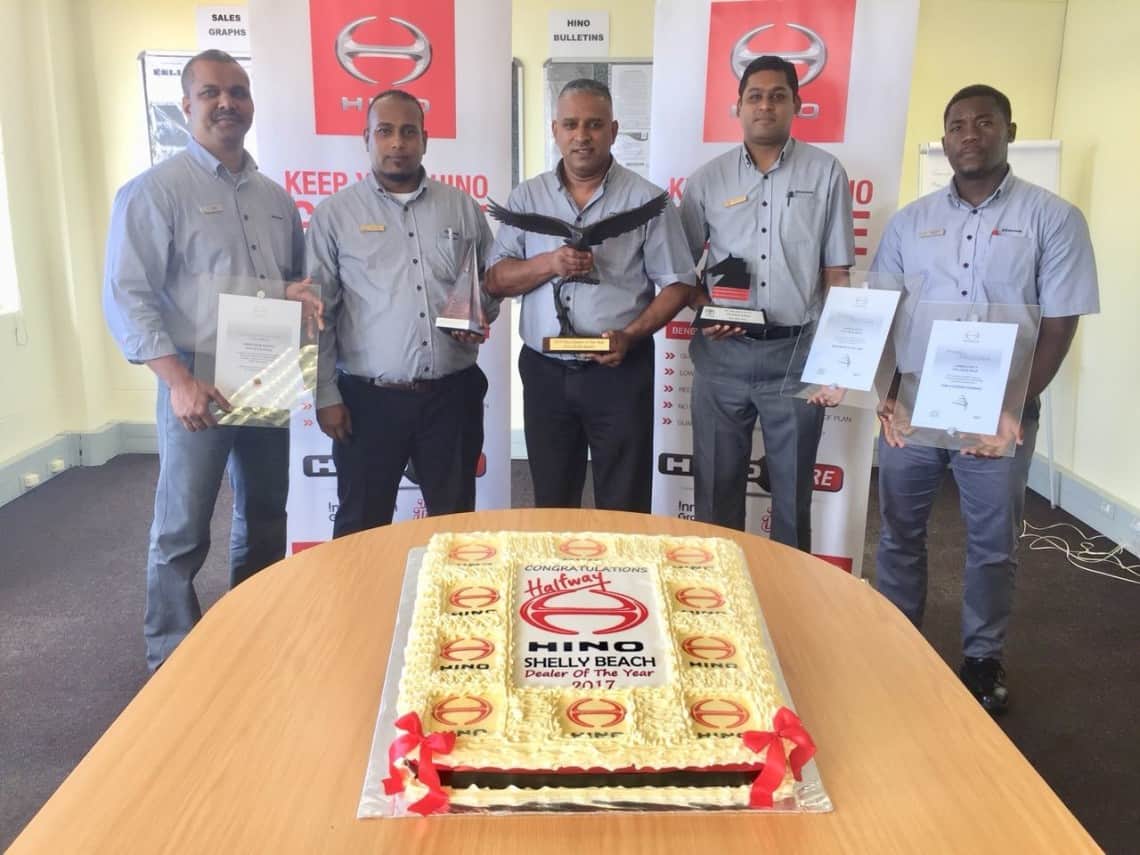 The Hino Shelly Beach dealership, which was built in 2007, was refurbished last year and this included the installation of rainwater-saving storage tanks. The focus on customer service extends to having a fully equipped service centre with eight drive-through bays capable of handling complete rigs, with trailer maintenance available. This facility and four mobile units currently service 18-25 trucks a day so there is seldom a delay in having a truck serviced.

“We have started 2018 on a positive note, being over target in all aspects of our business and are determined to retain the Hino of the Year award for a second year,” concluded genial and enthusiastic Gansen Chetty.