Telematics and vehicle tracking brought to you by Ctrack by Inseego
You are here
Home > Company News > Coronavirus causes logistics, supply chain nightmares

Reduction in total freight volumes for the year to March 2020 of -7,1% indicates the depth of the decline in the local goods economy. Despite not having many lockdown restrictions, the first quarter drop in volumes was still the steepest experienced in South Africa since 2016.

The decline is consistent with a -3% to -4% slump in overall economic activity in the first quarter, thereby deepening the recession. We expect it to worsen before the economy starts to recover after the second quarter.

However, the -10,6% single month decline in March is the most significant monthly decline we have on record, which goes back to January 2008. The decrease in March volumes was even more severe than in March 2008 when the financial crisis crippled the world’s economies.

Ultimately, the Coronavirus has hurt the freight and transport sectors more broadly than that crisis did.

While many service areas of the economy like food, retail and teleconferencing were able to continue, the decline in production, combined with numerous supply chain disruptions, has compounded the industry’s woes.

With profit margins of less than 4% in road freight and about 6% in rail, it is clear that many companies will struggle to survive without government help. The 10% drop in road freight in March is of grave concern, as the sector is the backbone of the economic value chain.

Time constraints and other blockages are increasing transport costs as transporters have to pay staff for the long hours worked. While the cost of transport declined due to the oil price, employee costs rose nearly 8% in March. 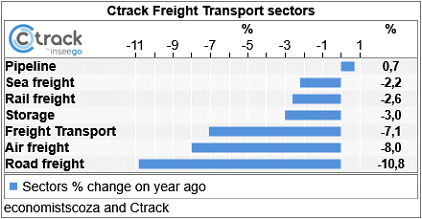 On top of this, some trucks have been quarantined for weeks in neighbouring countries, while coordination between provincial traffic authorities in South Africa is incredibly slow.
Fuel sales, which may have spiked due to the decline in the fuel price in early March, are now under tremendous pressure.

The airline industry, from both the passenger and freight side, is unlikely to be the same again. Reports of voluntary salary cuts and the taking of early leave are numerous.

Further reports in the media suggest some sailors have not been able to get any shore leave – even in cases where cargo vessels are anchored outside the harbour. Oil tankers are primarily now used for storage of oil as the supply far exceeds demand.

Farming value chains are also struggling. Restaurant closures mean fewer sales, while too little fertilizer and other inputs are arriving.

Warehouses may not yet fully reflect the massive build-up of stock they are having to keep. The storage problem is being exacerbated by the urgent movement of freight away from congestion points in the country’s ports. Some ships are acting as storage facilities at sea.

The Ctrack Freight & Transport Index is likely to show further freight volume declines in the next two months. The Ctrack Index is the broadest and earliest available data point for the overall freight sector in South Africa.

Note: Some of the data points used here are estimates, while our sources provide other data. We believe that this is a 95% accurate reflection of the events that took place in March. 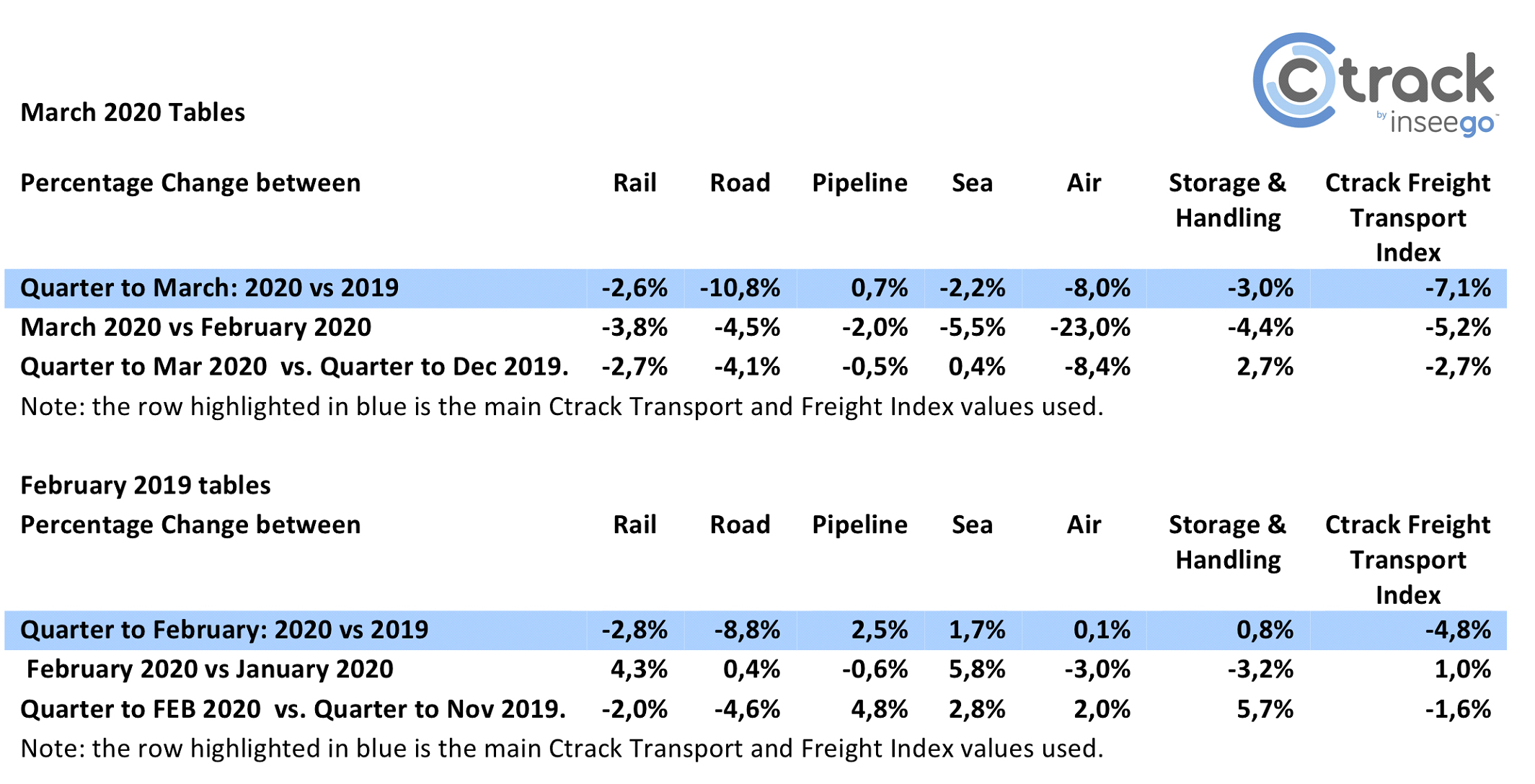