Hino, the leading Japanese truck manufacturer, scored its best finishing position in the Dakar Rally in the last 11 years when Teruhito Sugawara and his navigator, Mitsugu Takahashi, finishing sixth overall out of only 19 finishers from 44 starters (43%) in what is said to have been the toughest Dakar in history. Importantly the all-wheel drive Hino 500 won the under 10-litre engine capacity class for a ninth consecutive year and ran virtually trouble-free.

This year’s two-week event covered a route of almost 9 000 kilometres and took competitors from Lima in Peru, through Bolivia to the finish in Cordoba, Argentina.

This was the 26th year in succession since it entered the Dakar for the first time in 1992 that Hino had at least one of its trucks qualify as a finisher in this gruelling race, which celebrated its 40th anniversary this year.

Unfortunately, the second Hino entry was forced to retire after sustaining substantial mechanical damage from hitting a rock. This is only the second time that a Hino has failed to finish the Dakar, with the previous occasion having been in 2010 when one of the team trucks was disqualified for missing a checkpoint.

Early into the second timed special stage the Hino of Dakar veteran Yoshimasa Sugawara (76) and his navigator Katsumi Hamura sustained serious damage to the left front wheel hub and drive joint after hitting a rock and were forced to retire. The front wheel had locked up, causing the truck to veer off course where it got stuck on a sandy slope. After the crew had dug the truck out it had to be towed to the nearest road by one of the organiser’s assistance trucks.

The left rear planetary gear reduction mechanism had also been damaged in the contact with the rock, so the crew was unable to drive the truck under its own power. The team’s mechanics, based at a nearby bivouac, rushed to assist and managed to make the truck driveable with front wheel drive. 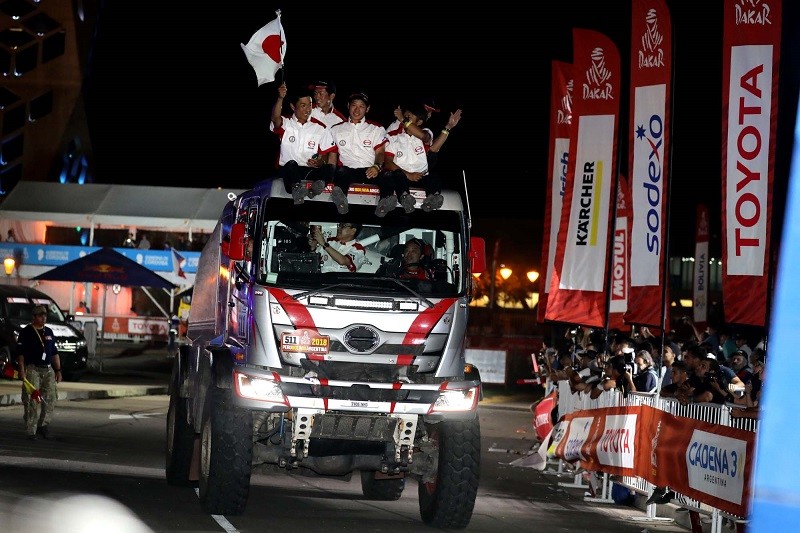 However, the fact that outside assistance had been required to get the truck going again meant disqualification, which was a very sad ending to Yoshimasa’s 35th consecutive Dakar Rally, having competed on motorcycles (starting in 1983), quads and cars before switching to Hino trucks in 1992 when this epic race finished in Cape Town.

This was the 20th year that Yoshimasa’s son, Teruhito, has competed for Hino Team Sugawara in this world-famous event which had its roots in a race from Paris to Dakar in Africa. The event was moved to South America in 2009 when terrorists threatened the 2008 event which had to be cancelled. Despite the move in continent the Dakar name has been retained and is now a pinnacle in endurance motor sport.

Teruhito started as a navigator in his father’s Hino in 1999 and was promoted to a team driver in 2005. He has only finished out of the top 15 overall twice in 13 Dakar Rallies as a driver. 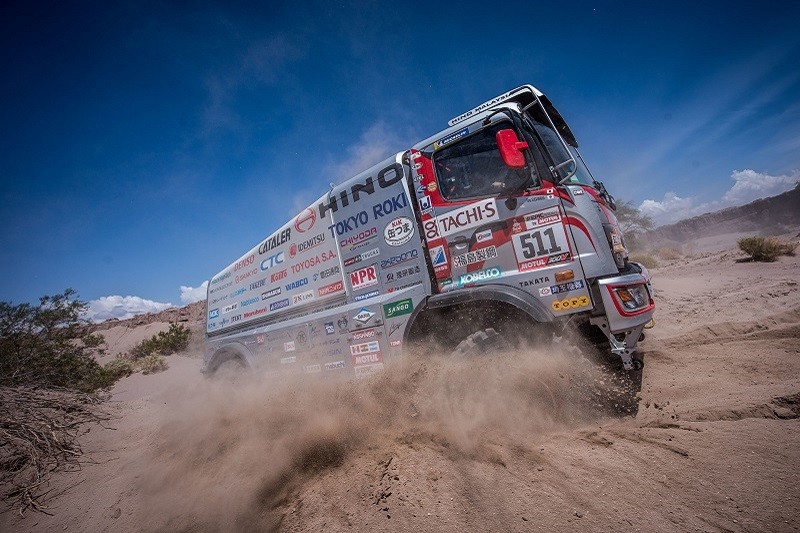 Hino Motors Chairman, Yasuhiko Ichihashi, was at the finish in Cordoba to welcome the team and said: “I am very happy that the Hino Sugawara team was able to fulfil its goal of scoring its ninth consecutive win in the category for trucks with engines of less than 10-litres capacity. Whilst one of the Hino trucks had to withdraw, I am very pleased that the other truck was able to deliver our hoped-for results. We, as Hino Motors, intend to continue our activities as competitors in this demanding endurance test of man and machine.”