The annual Nampo Harvest Day show in the Bothaville area in the Free State is considered the most important show in South Africa for displaying its products by Hino South Africa, one of the country’s leading truck manufacturers. This year marked the 51st staging of this massive agricultural extravaganza by Grain SA and once again Hino had an imposing and comprehensive display.

“We sell about a quarter of our Hino trucks to the agricultural and related sectors,” says Leslie Long, the Senior Manager of Marketing and Product Planning at Hino SA. “Success in this market segment is long-running. It all started when Hino Trucks were introduced to South Africa by Toyota in 1972 as Toyota already had a strong presence among farmers with its range of bakkies,” added Long.

Addressing journalists at Nampo, he went on to explain that Nampo (originally organised by the National Maize Producers’ Organisation in 1974) provides an excellent opportunity for interaction with current and potential customers with very few “tyre-kickers.” This year, as is usual, several of the Hino trucks on the stand were sold off the stand.

“The resilience of the farming community, even in times of economic downturns and droughts is amazing and there is also a strong camaraderie among farmers. For instance, last year we provided a truck and inter-link trailer to deliver feed to drought stricken farmers. This year some famers who had enjoyed rain and good crops this year came to our stand and said they had feed they were prepared to donate to needy farmers if we could deliver it, which we will do,” commented Long. 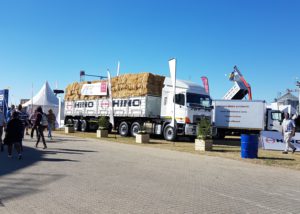 The Hino SA executive continued his address by explaining the thought processes that go into making up the range of trucks to be displayed each year at Nampo.

This year Long said a big push was made to promote the fact that the 1.5-ton Dyna was now rated as a light commercial vehicle and can be driven by holders of a normal driving licence which opens more potential buyers. In addition, Hino SA, and its Post Production Operations facility in Prospecton can offer four standard bodies on the Dyna chassis, consisting of a panel van, “Tautliner”, dropside tipper and dropside which cuts delivery time. An example of the dropside tipper was on display and was sold off the stand.

A new derivative of interest to farmers is the 500-Series Hino 1322 with four-wheel drive and the option of single or dual rear wheels with the single wheel model resulting in significant fuel consumption benefits in sand driving. Previously this model was only available with dual rear wheels.

A Hino 1626 which is the bread-and-butter freight carrier in the range and popular with farmers was fitted with a cattle-rail body. It was also sold off the stand.

Two examples of the Hino 700-Series extra-heavy duty range were on display, one was a 6×4 truck-tractor and the other was the range-topping 3541 8×4 tipper. 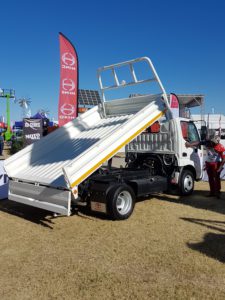 “A further indication of our support for the agricultural sector was our decision to become involved with the AgriBonus Rewards Programme. Last year Hino has become the first truck brand to become a partner in the AgriBonus Rewards Programme, which is designed to benefit Hino customers including farmers. Members of AgriBonus earn points through purchases from a variety of service providers, who are all prominent in their various fields of business,” explained Long.

The points earned can then be used to earn a wide range of rewards, which are available through the Bonus Shop. They vary from holiday getaways to electronics, household appliances, camping equipment and much more. Members also have the option of donating their points to an affinity of their choice, such as the local school or organisations such as the Endangered Wildlife Fund’s initiative to save the rhinos.

Buyers of new Hino trucks and Dyna are rewarded at the rate of one point for every R40 spent in buying a new truck.