Ford is raising the bar further in the ultra-competitive light commercial vehicle (LCV) segment with the launch of the New Ranger for 2019. Featuring an extensive range of mechanical, technological, feature and comfort upgrades, the new line-up will make the Ranger an even more compelling choice amongst workhorse and leisure-oriented pick-up customers.

“The current Ranger has been a fantastic success story for Ford in South Africa where it remains one of the country’s top-selling vehicles, and the leading LCV export to markets in Europe, the Middle East and Africa,” says Doreen Mashinini, General Manager Marketing at Ford Motor Company of Southern Africa. 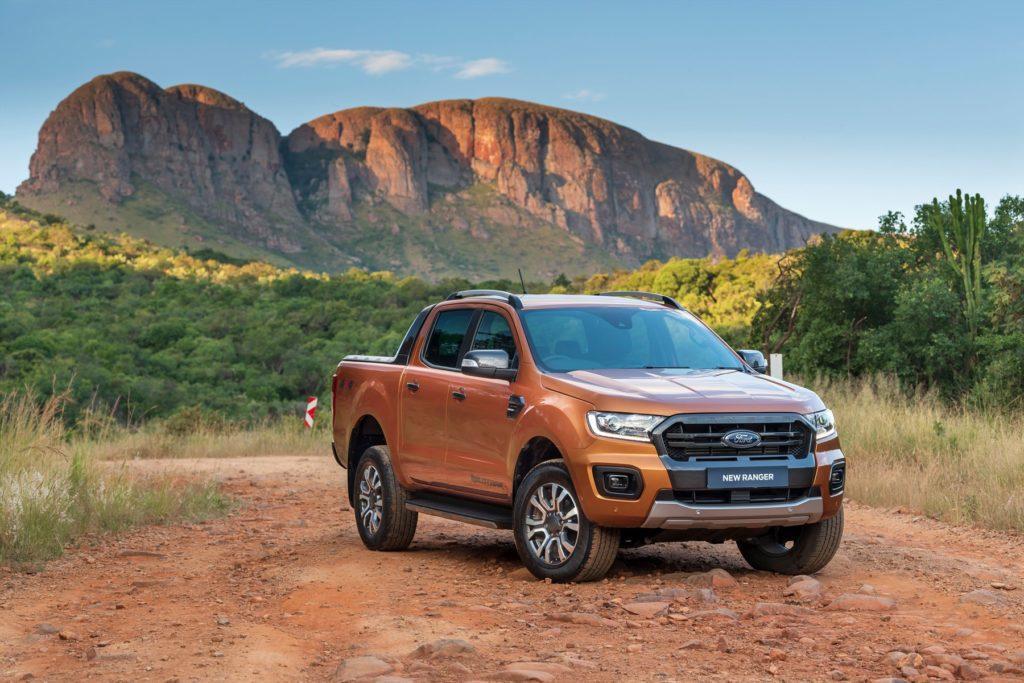 “The New Ranger introduces fresh exterior and interior design cues that build on its ‘tough truck’ image, complemented by the adoption of new technologies that further bolster the Ranger’s established reputation for safety, convenience and comfort.

“With an extensive range of under-the-skin changes, including the introduction of the all-new 2.0-litre Bi-Turbo and Single Turbo diesel engines, a revolutionary new 10-speed automatic transmission and a revised suspension set-up, this is by far the biggest upgrade yet for the current-generation Ranger, which continues to be proudly produced at Ford’s Silverton Assembly Plant in Pretoria,” Mashinini adds.

Continuing the Ranger’s proven ‘Built Ford Tough’ heritage, the assertive styling of the 2019 model delivers an even more powerful presence on the road. The latest model offers the opportunity to provide greater differentiation in the series. Accordingly, the front-end design of the popular XLT series has been updated to have a more horizontal feel, with the centre grille bar now divided into two, giving it a more precise and well-crafted look.

The lower bumper also presents a sense of solidity and strength through the centre beam that runs into the outer fog lamp areas. With a wider lower grille, the new bumper complements and harmonises well with the new front end. The same design execution has been applied to XL and XLS variants.

The range-topping and very popular Wildtrak, which now comes with HID headlamps and LED daytime running lights, has been intentionally kept more familiar with the vertical aspect ratio grille that also incorporates the ‘nostrils’ in its design. Along with a split centre bar and additional venting holes for cooling, the new design is more aggressive in its application but remains true to the Wildtrak DNA.

The Wildtrak lower bumper surface is more chiselled than before, again reinforcing its ‘tough truck’ image with a wider lower grille and silver accented skid plate. The larger, more aggressive fog lamp bezels are pushed further outboard, again accentuating width and incorporating LED fog lamps that give a greater level of distinction for the Wildtrak.

A striking new Saber Orange exterior colour makes its debut on the Wildtrak, matched to a unique dark, titanium-effect finish for the trapezoidal grille and distinctive outboard air intakes. The same titanium-effect accent colour extends to the side mirrors, door handles, side air vents and load-bed rails for a bold and sporty appearance.

The comfortable and car-like interior is now delivered with an Ebony Black environment, and the painted surfaces are given greater shine and depth­­. The Wildtrak’s updated interior delivers a more upscale, sporting appeal featuring dark-satin chrome elements, a gloss-finish decorative spear and upscale partial-leather seats embossed with Wildtrak graphics. The seats have also been redesigned to be both sportier and more luxurious, incorporating additional leather content, ‘Mettle’ carbon-like weave accents and ‘Saber Orange’ stitching.

The high-tech 2.0 Bi-Turbo engine is available on the Wildtrak, and will also power the soon to be launched Ranger Raptor. Delivering optimised performance alongside improved fuel-efficiency, the Bi-Turbo engine relies on a variable-geometry high-pressure turbocharger along with a fixed-geometry low-pressure unit. 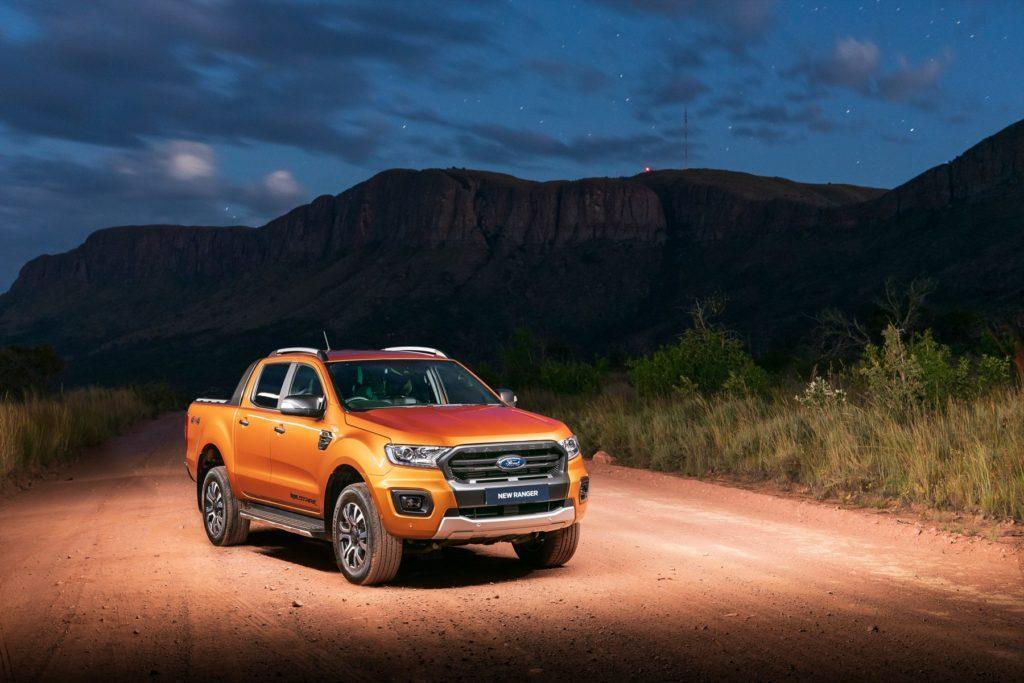 The two turbochargers work in series at lower engine speeds for enhanced torque and responsiveness. At higher engine speeds, the smaller turbo is bypassed and the larger turbo provides boost to deliver high power. Maximum outputs are rated at 157kW and an impressive 500Nm of torque from 1 750 to 2 000 r/min.

In the case of the 2.0 Single Turbo engine, which is offered on the Ranger Double Cab XLT 4×4 and 4×2 derivatives, a compact single variable-geometry turbocharger has been specifically designed to deliver more performance at lower engine speed compared with the current 2.2-litre TDCi engine. Delivering a light and urgent feel across the rev-range, it produces 132kW and 420Nm between 1 750 and 2 500 r/min.

Customers will still have the option of the popular five-cylinder 147kW/470Nm 3.2-litre Duratorq TDCi engine, available in Wildtrak and XLT specification on the double cab derivatives, as well XLT and XLS models in the versatile SuperCab range.

The tried and trusted 2.2-litre TDCi engine remains a key part of the New Ranger line-up across the Single Cab, SuperCab and Double Cab models. It continues in the two existing levels: 88kW/285Nm with a five-speed manual gearbox for the base-spec models, and 118kW/385Nm for the more upmarket versions, available with a choice of six-speed manual and automatic transmissions.

“As the new 2.0 Bi-Turbo and Single Turbo engines are only available in four derivatives at launch, the Duratorq TDCi engines still power the remainder of the 33 models available in the New Ranger line-up, and we have many thousands of customers who have been truly delighted with the impressive all-round performance and durability of these units,” Mashinini states.

“In selected XLT and Wildtrak models, we are taking the unprecedented step of giving customers a choice of engines to suit their preferences and driving requirements.”

The impressive 2.0-litre Bi-Turbo and 2.0 Single Turbo engines are exclusively available with Ford’s sophisticated all-new 10-speed automatic transmission, with performance and durability proven in applications as diverse as the Ford F-150 pick-up and the new Ford Mustang.

A wider spread of ratios ­and high-tech new features, including real-time adaptive shift-scheduling that allows the transmission to adapt to changing conditions, enable the optimal gear to be selected for performance, fuel-efficiency or refinement in any driving scenario.

Ford engineering data, based on real-world driving cycles, indicates an improvement in fuel-efficiency of up to nine percent in the case of the 2.0 Bi-Turbo engine mated to the 10-speed automatic transmission, compared to the current 3.2-litre TDCi and six-speed automatic gearbox.

Additional innovations include the Progressive Range Select (PRS) that has an SST (Select Shift Transmission) button. This function is able to lock out selected gears from the automatic shifting range, which can be beneficial when towing, driving in slippery conditions or climbing a steep gradient. ‘Sport’ mode makes the gearbox more responsive for maximum performance, and there’s the option of full manual mode from the ‘S’ position, controlled via +/- buttons on the new gearshift lever.

The Ranger is already highly regarded for its impressive ride and handling characteristics, and the 2019 model range has benefitted from further enhancements that result in significantly improved ride quality more akin to that of a sport utility vehicle (SUV) than a pick-up.

A key change has been the relocation of the front stabiliser, or anti-roll bar, from the tight confines in front of the fully independent suspension to a new position behind the axle. This new set-up optimises the design and performance of the stabiliser bar, resulting in improved roll control – which, in turn, enables a decrease in front spring rates, thereby giving the Ranger better ride performance and comfort. 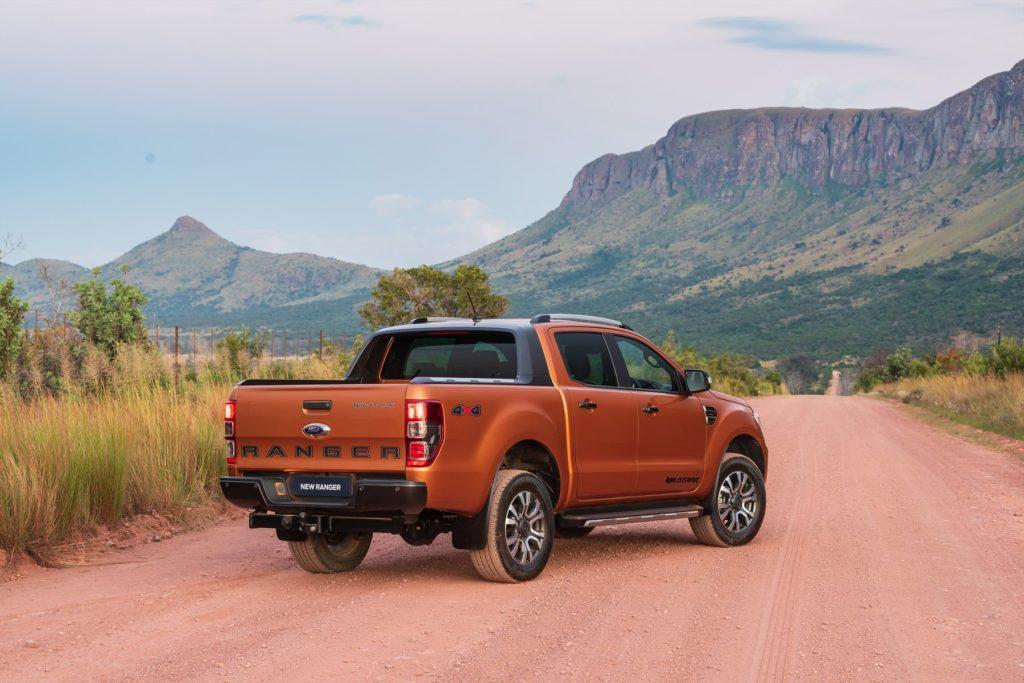 Compared to the outgoing Ranger line-up which used a single front damper setting across the range, four damper rates have been developed for the New Ranger. These settings have been tuned according to the front kerb weights of the individual models based on the body style, engine and drivetrain (manual vs automatic, 4×2 vs 4×4). At the same time, the standard tyre pressure has been reduced from 240 to 210 kPa.

Combined, these refinements provide a plusher ride over rough surfaces by better isolating the occupants from the road inputs. They also improve vehicle handling over corrugated surfaces, give better steering precision and control, and benefit the vehicle posture and ride performance when laden.

The Ranger’s exceptional towing capacity of up to 3 500kg remains unchanged, as do the impressive load capacity of up to 1 199kg (on selected SuperCab models), the 800mm water wading depth and 230mm ground clearance.

The Ford Ranger continues to rewrite the rulebook by introducing trend-setting technologies to the pick-up segment, and the New Ranger is no exception.

The innovative Semi-Automatic Parallel Park Assist (SAPPA) currently available on Ford’s Everest SUV is now standard on the Ranger Wildtrak. The system uses ultrasonic sensors on the front and rear bumpers that search for and identify parking spaces that are big enough to parallel park the vehicle. A combination of the Ranger’s electric power-assisted steering (EPAS) and sensors are used to steer the vehicle safely and perfectly into place, while the driver simply operates the gears, accelerator and brake.

Adding further everyday convenience is the new Passive Entry and Passive Start (PEPS), fitted as standard on the XLT and Wildtrak. The keyless entry and passive start uses an intelligent access system that allows the driver to unlock the vehicle and start the engine without removing the key fob from a pocket or bag. When the key is in the vehicle, the driver simply presses the Start/Stop button while applying the brake pedal to start the car.

The all-new Ford key fob design that debuts on New Ranger incorporates a mechanical key blade to unlock the doors manually if the unit’s battery is depleted, as well as a designated back-up pocket between the cupholders that enables the push-button start. Once in the vehicle, the passive Start/Stop button allows the driver to turn on the ignition, or to start the engine while pressing the brake pedal.

Ford’s award-winning SYNC® technology remains the cornerstone of the Ranger’s in-car entertainment system. XLT and Wildtrak models are equipped with the high-end SYNC® 3 with Navigation, linked to the integrated eight-inch touch-screen colour display.

A full Category 1 Thatcham-specification alarm is now standard on all Ranger XL, XLS, XLT and Wildtrak models, complemented by a spare wheel lock across the range.

One of the truly innovative new features making its debut on the Ranger XLT and Wildtrak is the EZ lift tailgate, which is a major boon for ease of use and convenience. A torsion rod is fitted into the tailgate, hinged to the vehicle body. This provides a significant 70-percent reduction in the initial lift force required to close it. Additionally, the opening of the tailgate is dampened, making it much easier to control when opening.

Acoustic laminated front side glass is now available on the XLS, XLT and Wildtrak models, which helps reduce the noise reaching the occupants in the vehicle. This is bolstered by a specially designed B-pillar margin seal that has been introduced to further reduce noise levels inside the cabin.

The 2019 Ranger also sees the introduction of Active Noise Control (ANC) on the Wildtrak Bi-Turbo, once again derived from the Everest SUV.  These improvements and new technologies have improved the articulation index inside the New Ranger cabin by up to five percent, making it easier to have a conversation between occupants inside the moving vehicle.