Rosslyn, South Africa (15 September 2016) – Nissan has become the first manufacturer in South Africa to offer wheelchair-friendly vehicles to the taxi industry in order to meet the growing demand for safe, reliable transportation for people living with disabilities. 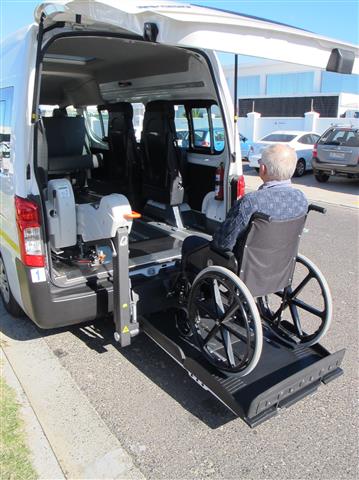 The company has developed a full conversion of its popular NV350 Impendulo, transforming the vehicle into a spacious carrier suitable for disabled passengers including hydraulic lift, rear-facing seating and aluminium flooring which helps to keep wheelchairs in position.

The converted Impendulo, only released in August, is attracting interest and enquires from several sectors, including in the Eastern Cape where the vehicle has already been deployed within regional health departments.

“There is a definite need for more public transport facilities that cater for people living with physical disabilities,” says Wonga Mesatywa, Director Corporate and General Affairs at Nissan Group of Africa.

With taxis transporting approximately 15 million commuters daily, according to the South African National Taxi Council (Santaco), and approximately 7.5% of the country’s population regarded as having a disability, many disabled people remain unable to access this vital mode of transport. They are therefore excluded from gaining meaningful employment or education opportunities, and participating in the economy.

The state of SA’s public transport

Many find it difficult to use taxis because the vehicles aren’t properly equipped for people living with physical disabilities, especially people in wheelchairs. Most taxis don’t have space to fit a person in a wheelchair and taxi drivers are reluctant to pick up disabled people.

“We had to invest considerable resources into buying two wheelchair-equipped vehicles because we could not rely on public transport facilities like buses or taxis,” she adds.

This is a problem Louw feels particularly strong about after a former physically disabled colleague of hers was hijacked and left stranded on the side of the road while driving to work one day. Determined to get to work she attempted to catch a bus but she was unceremoniously told to disembark because the bus driver said he could not accommodate her wheelchair.

“I remember how humiliated and embarrassed she was. It was heart-breaking. It’s pure discrimination and something needs to be done about it,” she says.

While Government and the Department of Transport are focusing on improving public transport for people with disabilities, through the Public Transport Strategy and Action Plan of 2007, minibus taxis and buses remain ill-equipped to transport people living with physical disabilities.

Easier transport for the disabled 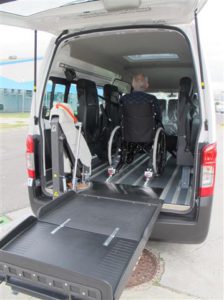 Unlike most other minibus vehicles, the interior seating in the Nissan NV350 Impendulo can be removed, and a portion of it adapted to be rearward facing so wheelchairs can fit comfortably inside the vehicle. This is also removable, thereby allowing for versatile use.

Aluminium flooring in the rear passenger section of the vehicle also keeps wheelchairs safely in place while it is in use.  The conversion makes maximum use of the available space within the vehicle.

One of the most useful modifications to the vehicle is the hydraulic lift which allows for people in wheelchairs to have easy access through the rear door. The fact that Original Equipment Manufacturers (OEMs) mass ratings on the Impendulo are class leading, makes it an ideal platform for this type of conversion because it minimises the chances of overloading. This is a key differentiating factor for the Impendulo compared to similar vehicles on the market.

The converted vehicle has achieved homologation, meaning it meets regulatory standards and specifications, such as safety and technical requirements.

In addition to providing safe transport for physically disabled members of society, the conversion is also ideal for a variety of applications including hotel fleets, inter-hospital transportation and frail care.

“The conversion was only released last month but it has already been well received and we have received multiple enquiries about the modifications made to the vehicle,” says Mesatywa.

“As a developing country, the position and status of disabled people in society has traditionally been one of exclusion. Unfortunately many people living with disabilities in South Africa have been excluded from mainstream society and therefore prevented from accessing fundamental social, political and economic rights due to a variety of different factors. Lack of access to adequate transport shouldn’t be one of them,” Mesatywa concludes