The East London-based Daimler Truck and Bus Southern Africa (DTBSA) plant has marked a milestone in collaboration with its ‘mother’ plant in Wörth, Germany. On 29 April the 750 000th truck kit from the CKD Centre (= Completely Knocked Down) at the Wörth plant was packed in a 40-foot sea container for its journey overseas. It was shipped to Port Elizabeth and transported to East London where it came off the production line in July 2019. The kit has been assembled at the local plant into the complete truck: a white Actros 2652 LS 6×4, which is planned for delivery to its new owners, Beefmaster, in the coming week. 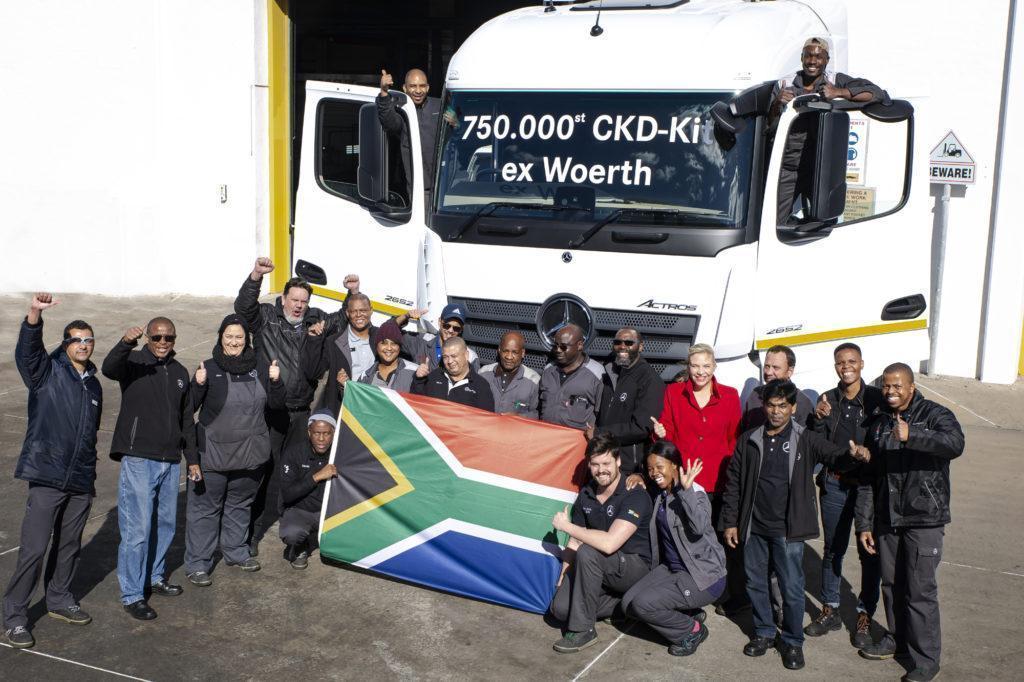 For more than 50 years, the CKD Centre in Wörth has stood for the successful implementation of its original concept of “shipping quality”. Since 1966, the centre has sent high-quality individual truck components produced at the site to the various international assembly plants. The kits are assembled reliably and flexibly at the foreign locations in accordance with Mercedes-Benz’ high quality standards. The Mercedes-Benz truck kits, which have been delivered since the founding of the CKD Centre to a total of 60 countries around the world can consist of up to 2 500 individual components.

In order to keep operations, processes and handling as efficient as possible, sets of four identical trucks are usually packed together, which in most cases also fit into four overseas containers. Such a four-packed set consists of a total of 48 packages and weighs between 50 and 70 tons, depending on the design.

The experienced production team from Wörth plays an important part in safeguarding strict quality requirements all over the world. The specialists in Wörth regularly support colleagues at foreign plants with production start-ups, for example, as part of special training programs.

Thus, as the CKD Centre of competence Wörth plays a key role in the international Mercedes-Benz Trucks Production Network.

Since 1966, the CKD Centre of competence significantly helps to tap important growth markets for Mercedes-Benz trucks from Wörth.

Maretha Gerber, Head of Mercedes-Benz trucks at DTBSA, says: “Thanks to its high degree of flexibility, the CKD Centre is always able to meet customers’ requirements at short notice in other markets around the world. By now, the CKD Centre uses this model in an exceedingly flexible and reliable manner to supply parts kits for Mercedes-Benz trucks to numerous markets like South Africa, Russia, Saudi Arabia or Malaysia, in accordance with customers’ specific requirements. The local assembly in the markets allows meeting the demands of truck customers, which vary significantly by region, rapidly. Customers also benefit economically from local production due to the significantly lower import duties at many places.”

More than half a Century of CKD know-how from Wörth

CKD production at the Wörth plant started in 1966 with around 500 kits. The first truck kits were sent to Iran. In 1969, the CKD Centre produced more than 11 000 CKD kits for the first time. Since 1978 parts kits have been assembled at the CKD packaging hall with container loading. Today, the CKD Centre in Wörth employs about 500 people. The current portfolio of the CKD Centre in Wörth includes the Mercedes-Benz Actros and Arocs in the fields of road and construction site transport. In the course of digitalisation, the IT infrastructure in the CKD Centre is currently being converted to latest technologies so it can be controlled, picked, packed and scanned paperless and using handhelds in the future.

About the Mercedes-Benz Wörth Plant

The largest truck assembly plant of Mercedes-Benz Trucks was founded in Wörth am Rhein in 1963 and produces the Mercedes-Benz Antos, Arocs and Atego trucks – as well as the Actros, the world’s most successful heavy-duty truck, for more than 20 years. The Mercedes-Benz special trucks Econic, Unimog and Zetros are also built here. Up to 470 trucks customised according to customer requirements leave Wörth every day. Customers in over 150 countries value the “quality made in Wörth”. The facility on the Rhine is the centre of competence for the global Mercedes-Benz Trucks production network. The Mercedes-Benz plant in Wörth also has more than 50 years of experience in CKD production, and delivers vehicle kits to numerous overseas markets for local final assembly. With about 10 300 employees, the Mercedes-Benz Wörth Plant is the second-largest employer in the state of Rhineland-Palatinate.

About the Mercedes-Benz East London Plant

The first truck was assembled at the then Car Distributors Assembly (CDA) in East London in 1962. CDA opened its doors in 1948 and was contracted in 1958 by Daimler-Benz to assemble Mercedes-Benz products. Since then, Daimler Trucks and Buses Southern Africa has assembled the Unimog, Mercedes-Benz buses, FUSO trucks, Mercedes-Benz trucks and Freightliner trucks. At present the commercial vehicle manufacturing plant has 300 employees and has had an investment of over R157 million in skills training; R18,1 million in enterprise development and R42,6 million in supplier development. Also R10,04 million has been invested in the local communities through the plant’s corporate social investment programs.

Gladstone Mtyoko, Head of Manufacturing Daimler Tucks & Buses Southern Africa, says: “As the assembly team, we have clear and stringent processes that we never deviate from. This has meant that our plant is rated as one of the best in the world.  We pride ourselves on world-class quality and unmatched reliability.  We only produce trucks that our customers will be more than satisfied with.”

“It is fitting for us to celebrate this milestone together with our ‘mother’ plant at Wörth as it reinforces our legacy of reliability, safety and outstanding workmanship.”