Telematics and vehicle tracking brought to you by Ctrack
You are here
Home > Headlines > Seventy years of the Unimog at the pomc’s cars in the park , Zwartkops on august 6, 2017

The Unimog Freunde Club of South Africa will be celebrating the 70th anniversary of this amazing “Universal Motoring Device” at Cars in the Park 2017 on August 6. It is expected that between 30 to 35 Unimogs will gather at the south-west corner of the display area, just below the ZOC clubhouse, as the Unimog club has done for the past decade.

“We will also be celebrating 10 years of Unimogs at Cars in the Park,” says club president Stefan Coetzee, “so it will be quite an occasion for us.

“And we will have a very representative turn-out of the Unimog’s entire history. We are expecting to have models dating back as far as 1951 and 1952, while we are hoping to have the latest 2017 model here as well.”

The Unimogs have a very interesting history here in South Africa. Many visitors to Cars in the Park on August 6 will remember these beautifully-engineered  massive off-roaders from their stints in the South African military in the early 1970s, when Unimogs did duty as ambulances and special field vehicles. And later, the Unimog chassis was used by the SA Military to produce the famous Buffel. Some 7 000 Unimog chassis and powertrains were imported into South Africa for military use, most of them re-bodied with Buffel bodywork. Later Buffels used the locally-produced ADE diesel engine in place of the Mercedes-built diesel engine. 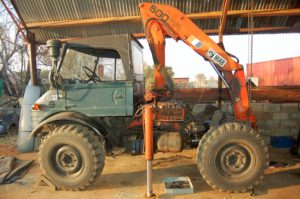 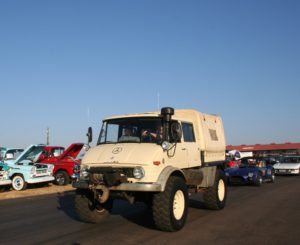 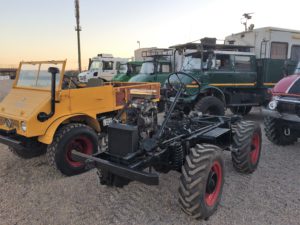 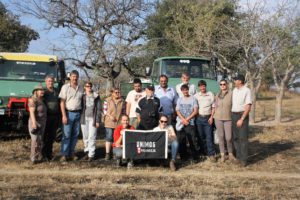 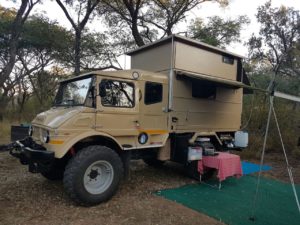 Stefan Coetzee notes that the club in South Africa has both a 1951 and a 1952 Unimog model amongst its members’ vehicles, and that the very early Unimogs used a red badge depicting ox horns, an association with its use for ploughing.

Back in late 1946 the first Unimog prototype was  built,  being the inspiration of former Daimler aircraft engineer Albert Friederich and designer Heinrich Roessler. An identifying feature of the first Unimog was that it had to have a wheel track of  1,27 metres to span two rows of planted potatoes.

The Unimog name was derived from UNIversal-MOtor-Gerät”, Gerät being the German word for device (also in the sense of machine)

Right from the beginning the Unimog was conceived as a go-anywhere, do-anything agricultural device, a truck, tractor and mobile agricultural machine rolled into one. With four wheel drive and massive ground clearance, and  three power-take-off points around the vehicle, the machine was first produced in volume by a company called Boehringer from early 1947 . Daimler-Benz  then took over production in 1951, as Boehringer could not keep up with production demand! It was after this period that Unimogs carried the Mercedes-Benz three-pointed star.

“The early Mercedes-built Unimogs were designated the 401 and the 411, and these were used here in forestry and on the railways,” says Coetzee. “We called these Baby –Mogs because of their smaller size.

“Over the years Unimogs changed shape, in terms of their application. You had workers, which had equipment bolted on all around the vehicle, and carriers, the longer based vehicle, which we saw here in our military. And Unimogs are still split into these groups today.

“We have one of the latest of just two 2017 Unimogs in South Africa, used for shunting on the Gautrain. And one of these will be coming to Cars in the Park!” 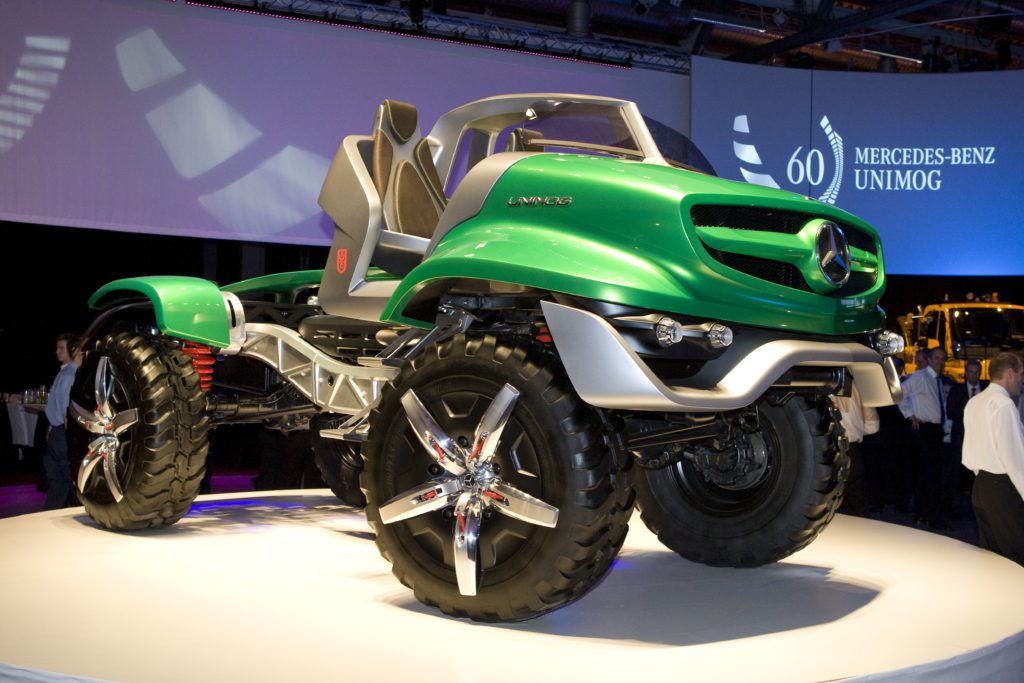 By 1966, no less than 66 different agricultural devices could be attached to the Unimog. Various body types emerged as well, and later various model sizes were introduced too.

Some 400 000 of these highly specialised vehicles have been produced and sold  around the world.

Stefan Coetzee notes that in the modern Unimogs, there is the facility to have left-hand-drive and right-hand-drive in the same vehicle. They are used for all sorts of activities in the bush, by farmers, firefighters, and are highly popular as overland travel vehicles for tourists wanting to travel down from Europe through Africa. They are also used for railway shunting!

A feature of its go-anywhere status is its massive ground clearance, achieved through a special transmission design using “portal axles” that enables the engine and gearbox to be located far above the centre line of the wheels.

*Cars in the Park 2017 is being held at the Zwartkops Raceway on August 6, 2017,m organised by the Pretoria Old Motor Club.

Classic cars, special-interest cars, motorcycles and car clubs will begin arriving at Zwartkops from 6 am on the Sunday. The gates open for spectators from 9 am. The Pretoria Old Motor Club’s event organiser Frik Kraamwinkel has catered for hundreds of stall-holders, well over 100 car clubs and up to 2 500 classic cars.

The Cars in the Park is the biggest Car Show in Africa, and has been organised by the Pretoria Old Motor Club since the early 1980s.

For information on securing stall space at the event, contact Frik Kraamwinkel on 082 444 2954 or via e-mail on frikkr@gmail.com