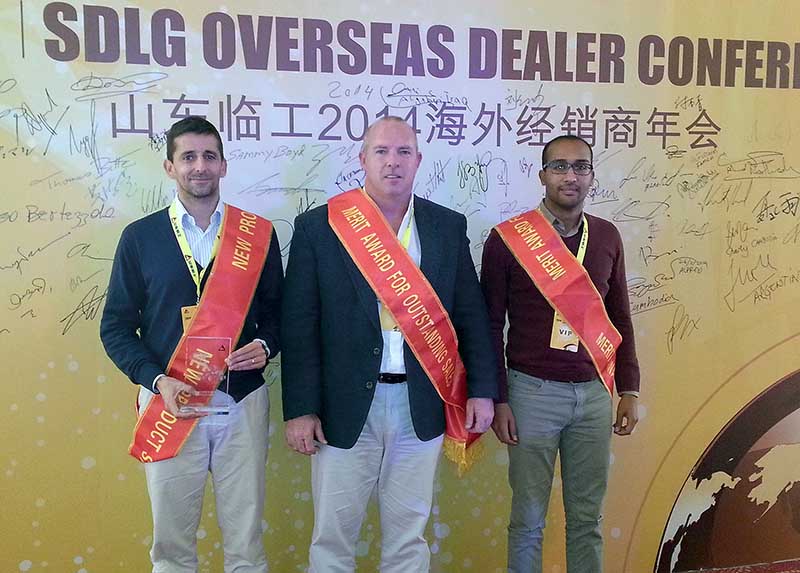 We (Babcock) were one of only two dealers to be recognised with this award and this is a milestone achievement for us.

Grant Sheppard, Babcock’s General Manager: SDLG, who attended both events accompanied by his two top performing salespeople, says he was thrilled to receive the award, particularly since Babcock has only been the exclusive distributor of SDLG construction machinery in Southern Africa since early 2012.

‘The award recognises the outstanding sales year we enjoyed in 2014,’ says Sheppard. “We were one of only two dealers to be recognised with this award and this is a milestone achievement for us.
‘SDLG really came into its own in Southern Africa in 2013, but 2014 truly entrenched us as a brand to be reckoned with in the market. Over the course of last year, we more than tripled our sales staff. We have representation in all the major centres of South Africa and the neighbouring countries now. This investment into our personnel and footprint is earning significant dividends and, building on this dynamic foundation, we have very high hopes for 2015.

‘SDLG really came into its own in Southern Africa in 2013, but 2014 truly entrenched us as a brand to be reckoned with in the market.

‘Our achievement lies in the fact that within a market sector that did not grow last year, we actually doubled the sales penetration of the SDLG brand. The reasons for this ‘beyond-expectation’ success include the level and quality of the support we offer our customers, our philosophy of partnering to enhance customer operations and the extensive sales and support footprint available to our customers across Southern Africa.

‘SDLG is represented in all Babcock service centres in the region, which translates to more than 20 outlets. This shrewd strategy has successfully exploited the best possible advantage out of Babcock’s existing footprint and afforded us a major competitive advantage.’

Sheppard says that during 2015 Babcock will extend its SDLG product range within the wheel loader and other market segments in response to customer requests.

The international SDLG dealer network is expanding rapidly and there is an expectation that there will be more than 100 dealers worldwide by 2016. The brand’s strategy puts customer satisfaction at the forefront, ensuring a strong aftermarket support offering. SDLG wheel loaders are one of the world’s biggest selling product lines in this sector.