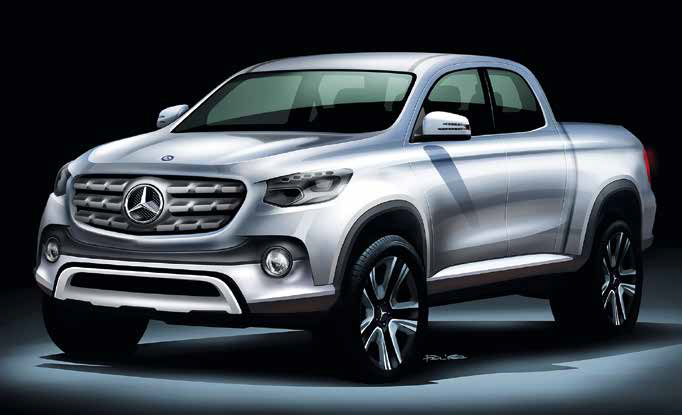 The Renault-Nissan Alliance and Daimler AG will expand their five year strategic cooperation into the pick-up segment. Together, Daimler and Renault – Nissan will develop a one-ton bakkie for Mercedes-Benz.

Mercedes-Benz recently announced its entry into this segment. The Mercedes-Benz pick-up will share some of the architecture with the all-new Nissan NP300 but it will be engineered and designed by Daimler to meet the specific needs of its customers.

The pick-up will feature a double cab and will be targeted both at individual and commercial customers. The target markets for the pick-up are Europe, Australia, South Africa and Latin America.

“Mercedes-Benz is the fastest growing premium brand in the world,” said Dr Dieter Zetsche, Chairman of the Board of Management of Daimler AG and Head of Mercedes-Benz Cars.

“Entering the rapidly growing segment of midsize pickups is an important step in continuing our global growth path. Thanks to our well-established partnership with the Renault-Nissan alliance, we are able to drastically reduce the time and cost to enter this key segment.”

The joint pick-up project is the latest milestone in the strategic partnership between Daimler and Renault – Nissan alliance.

Nissan is the world’s second-biggest one-ton pick-up truck maker and has been building and selling one-ton pickups for more than 80 years.

The NP300, sold under the name NP300 Navara and NP300 Frontier (depending on the market), was launched in June 2014 and is produced in Thailand and Mexico.

Nissan and Renault are already developing a one-tonner for Renault, which will also share some common architecture with the Nissan NP300. Production of this one-tonner will begin in 2016 at Nissan’s plant in Cuernavaca, Mexico.

Nissan will build the Mercedes-Benz one-ton pick-up in the Renault plant in Cordoba, Argentina, along with the Nissan NP300 and the Renault one-tonner for Latin America.

The three pick-ups will also be built in the Nissan plant in Barcelona, Spain, for other markets, excluding North America.

Production of the bakkies at the two plants will start by the end of the decade.

“Thanks to our cooperation with Daimler on this project, we will be able to share the cost of investment at the Cordoba plant, while at the same time open up new markets in the Latin American region for the Renault-Nissan alliance,” said Carlos Ghosn, Renault- Nissan Chairman and CEO.

“This project will also allow us to optimise production capacity at the Barcelona plant and enhance our competitiveness in an important segment.”

The joint pick-up project is the latest milestone in the strategic partnership between Daimler and Renault – Nissan alliance.

“After five years of cooperation between Daimler and Renault – Nissan, my conclusion is by all means positive,” Zetsche said.

“We have identified and launched many joint projects that create benefits for all partners involved.” And Ghosn added: “This cooperation is one of the most productive in the auto industry, enabling all partners to increase economies of scale while keeping our brands and products distinct.”