For one industry the depressed exchange rate of the Rand may be good, for another it’s bad

Isuzu Truck South Africa’s chief operating officer Craig Uren has offered a sanguine outlook on the transport market expectations for 2015 projecting an overall market growth similar to that of 2014 at between 1,2 and 2%.

It will be probably close to 1,4% given the low projected GDP growth of only 2 to 2,5% for 2015 says Uren. While he remains positive that the industry will rally as it has managed to do through turbulent times in the past Uren is realistic when he says that many compounding factors have to be weighed up together and not in isolation.

Take the weak ZAR and the weak Yen exchange rates to the USD on the one hand and the welcome drop in fuel prices on the other hand as an example. One cannot foresee how these factors taken individually may positively or negatively impact the local economy.

For one industry the depressed exchange rate of the Rand may be good, for another it’s bad.  “So too, one has to review all the issues affecting our businesses. We have to factor in different perspectives; and then one has to anticipate that one factor, say for instance – energy supply stability – may have a greater impact than another.”

Despite tough trading conditions in 2014 Isuzu Truck South Africa managed to maintain its two-year annual track record of selling over 4 000 vehicles (4 016 units in 2013 and 4 026 units in 2014) and posted a satisfying 12,8% share of the total truck market locally.

Since the introduction of the FX-Series into the extra-heavy trucks category Isuzu Truck SA has managed to record a steady growth to end 2014 with a 3,3% share of this segment. Productivity at Isuzu’s truck plant at Struandale in Port Elizabeth has “ramped up nicely despite labour unrest last year in South Africa”, said Uren.

Compared to similar territories, South Africa is pretty much on par with Isuzu Truck SA counterparts in other emerging markets. “The fundamental driver of our solid performance is the AMT technology (Automated Manual Transmission). We were the first to bring this technology to the medium and heavy commercial vehicle market in SA and we use it extensively across our product ranges.”

Painting a picture of what success would look like for businesses generally in 2015, Uren put a stake in the ground and said that his team would work towards achieving further growth on the 4 046 units sold last year.

Uren also alluded to the fact that the industry needed to become ‘Truckerneurially’ focussed. (Truckers/Entrepreneurs). 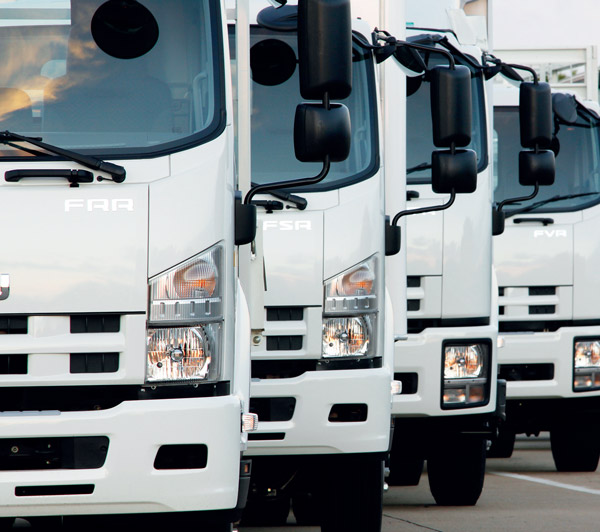 They would continue to drive product innovation and constantly seek out further opportunities to grow and develop locally. While Uren was not prepared to go into too much detail, he hinted that the company would be making some significant investments into local business during 2015 and 2016, saying that Isuzu Truck’s local plans will possibly be labelled ‘unconventional’ once details have been announced.

Uren also alluded to the fact that the industry needed to become ‘Truckerneurially’ focussed. (Truckers/Entrepreneurs). Trucks & Heavy Equipment can only assume that this also alludes to the ‘unconventional’ plans which are afoot at Isuzu Truck South Africa.

Upon questioning the size of future investments Uren only conceded that an amount in excess of R100 million would be made across the national dealer network affiliated to Isuzu Truck.

It is a known fact that a number of metropolitan Isuzu Truck SA brand dealerships had outgrown their present franchise base, and that they would be expanding and investing into non-metro areas. These new points of contact will be in both sales and service, providing a bigger footprint than the current Isuzu network of 35 dealerships.

Uren conceded that, given the plethora of challenges facing the transport industry – not the least being the insecure state of energy supply, unpredictable fuel prices, uncertain labour stability, fluctuating exchange rates, ever-changing legislation, the eToll debate, and the changing political environment – the industry and ‘Business South Africa’ were the ones investing in SA’s future, creating jobs and growing the economy.

“It is these sectors that need to make it clear that we do not need more obstacles, but that we would rather welcome a more collaborative approach, together with government structures, to find solutions that hamper our economic growth.

“Lastly, Isuzu Truck will follow its Japanese brand parent in bringing cost-effective products and great technologies to the SA market as and when appropriate and beneficial to the local market and customer demands.”