The room was floodlight with the branded MAN Bus nr 1000 which represented a culmination of 15 years of unique co-operation between customer and supplier that has successfully ensured a partnership that will endure for a very long time.

This event, held at the Meerendal Wine Estate in Durbanville Hills, was attended by staff from GABS and MAN. It included City of Cape Town Officials from the Mayors Office, the Cape Town Metro Police and City Transport as well as Western Cape Provincial Minister of Transport, Donald Grant. 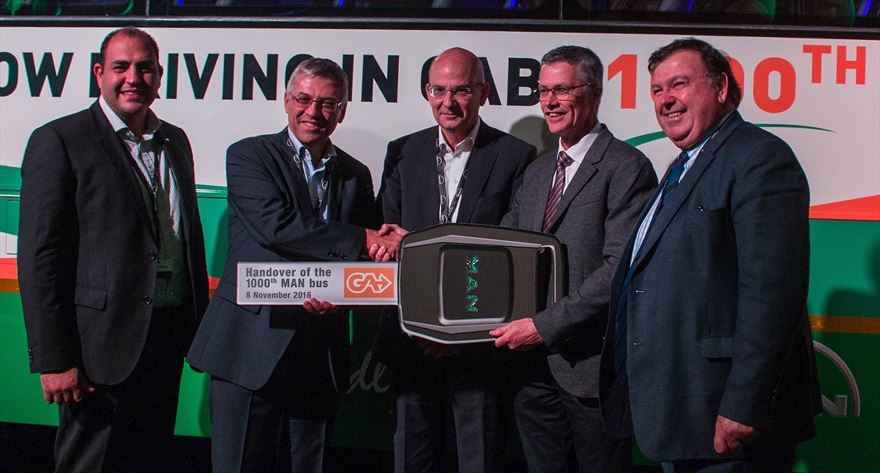 Mr. Markus Geyer, Managing Director of MAN Truck & Bus South Africa, highlighted the impressive history of both companies with the words, “In 2011 Golden Arrow Bus Services celebrated 150 years of providing efficient transport to the people of Cape Town. In 2015 we, at MAN, celebrated a hundred years of providing technologically advanced trucks and buses to our customers.”

Significantly, the term partnership was mentioned regularly throughout the event. Jerone Lagarde, Senior Vice President of MAN Truck & Bus, who had flown from the MAN head office in Germany especially for the occasion, commented on the philosophy at MAN of collaborating with their clients to develop and produce efficient and safe transport solutions. “We have a dedicated team that interacts with the engineers at GABS on a regular basis, ensuring they get the bus they need “, he said, adding as an example of the fruits of combined inputs, “I do not know of many international bus companies who have USB chargers or free on-board Wi-Fi for their passengers in their buses. This is just another way South Africa, Golden Arrow Bus Services and MAN is leading the way.”

Mr. Lagarde stressed the long term commitment of MAN to investing in South Africa and its people, with over 80% local content being used in the manufacturing of its buses, creating local employment, and upskilling workers.

He paid particular tribute to the drivers at GABS stating that the meticulous effort put into manufacturing the safest buses possible was only one side of the safety coin, with well trained, safety aware drivers, the other vital side.

Referring to the overall commitment of MAN to the environment Mr. Lagarde remarked, “we are very aware of the impact we have on our planet. As such we provide strategies that mitigate, reduce or cut our carbon offset. An example is our Assembly Plant in South Africa. It is one of the first in the world, and the first within the MAN Group, to be 110% energy independent. The extra 10% we send back into a local energy grid.”

Provincial Minister of Transport, Donald Grant, praised the management and staff of MAN and GABS for keeping Cape Town moving over all these years – with a safety record that is really impressive. 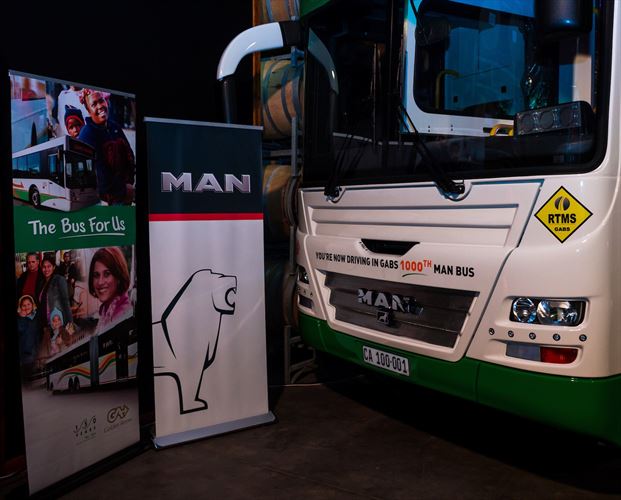 Referring to the Independent Customer Survey Report he said, “The vast majority of the customers of GABS are really complimentary about the service. Most of these passengers earn less than R3500 a month which makes the company vital to the transport needs of the poor.”  He wished the new MAN Bus nr 1000 a smooth and safe service for many years to come.

Golden Arrow CEO, Francois Meyer thanked every member of staff of both GABS and MAN, stressing that the ongoing success of the partnership is only made possible by the sterling efforts of the supremely dedicated members of both teams.

“I am proud to be part of this collaboration between GABS and MAN”, said Mr. Meyer. This long term relationship has ensured that the R1,4 billion that we have spent on MAN buses over the past 15 years has made GABS an enduring provider of reliable and safe public transport to the people of Cape Town – with a laudable 97% efficiency ratio.”